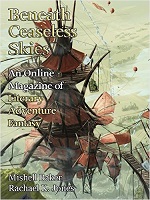 “Fire in the Haze” by Mishell Baker

Nocturnal goddess Ru’s most faithful devotees all have one thing in common: they are women. However, one of the greatest seeresses of the Starlight Temple, Jal En, has a secret. She is actually a he, transformed by the god Tuo the Betrayer to infiltrate the temple and start a “ripple in the pond.” Shrouded by Tuo’s gender-changing magic, Jal En has been able to live a decade within the Starlight Temple undetected, taking a seeress as a lover and rising in the ranks. Now, the spell is fading. Fearing discovery, Jal En must find Tuo again before the spell wears off; unfortunately, with Jal En and Tuo’s complicated and deeply intimate past––and Jal En’s failure to keep up his end of the bargain and bring change to the Starlight Temple––Tuo might not be too receptive.

“Fire in the Haze” is a curious, complicated tale, immersed in strained romantic relationships and the limits of a god’s empathy. Mishell Baker‘s world-building is the highlight of the story, showcasing an entire society and its mythology amidst a gray-tinged, watery world. With so much information to take in, there are lots of questions left unanswered, but in the end, “Fire in the Haze” works well as a stand-alone.

In the red desert world of “The Night Bazaar for Women Becoming Reptiles,” Hester longs to escape her oasis. Trapped in the monotony of sunside lovers and moonside lovers, and the gilded cage of the city, women devour reptile eggs and shed their human skins, to escape back into the desert and toward the sea. Hester sells the eggs that turn women into asp and crocodile, but no matter how many eggs she eats, the transformation doesn’t take.

Rachel K. Jones builds a sensory-rich world with stunning cadence, vulnerable characters, and a compelling, bizarre story. The somewhat surreal nature of the story lends itself beautifully to the prose, allowing the reader to slip, easy as a snake through sand, right into the world and deep into the hearts of its fascinating players.