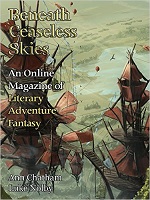 In “Mortal Eyes” by Ann Chatham, the pregnancy of the protagonist prevents her from sleeping, which in turn leads to an unwanted adventure with the strange creatures of The Hunt. An antlered being and other details strongly recall Celtic mythology. Chatham captures the out-of-control feeling that pregnancy can bring, along with the otherworldliness of a baby’s movement inside the womb through description and through the fae’s actions as parallel. While the plot itself is straightforward, the open interpretation of future consequences preys on the reader’s imagination and gives the story depth.

“The Nature of Ghosts and the Fate of Shadows” by Luke Nolby follows an old soldier whose identity is subsumed by memories of past conflicts, which in turn echo his current encounter with an oppressed people. Although this tale risks frustrating the reader, its non-linear plot serves to emphasize the unchanging violent nature of the human condition as seen at both the immediate micro level and the macro level of the passage of time. The protagonist’s ghosts act little in the present of the story, perhaps reflecting the fractured nature of the soldier’s compartmentalized identity, as well as his cynical view of war and death.