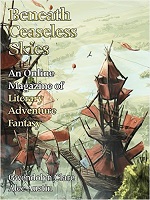 “Nothing But the Sky” by Gwendolyn Clare

Gwendolyn Care‘s “Nothing But the Sky” is set in a secondary world replete with floating cities, airships, and winged dragons. A young ensign in the Emperor’s fleet is tasked with finding the runaway niece of the Emperor “because he was arukai—a soldier who had once been a woman. Only he could be trusted alone with the king’s niece, because of all the pterather riders only he was incapable of compromising her virtue.” So the young ensign and his pterather (in essence a winged dragon to which he is bonded), begin their search for the Emperor’s niece, their only clue a piece of the niece’s scarf which the pterather has been given to sniff, its sense of smell highly sensitive.

After the niece’s scent leads them to the hub city’s expansive library, and with the help of the librarian who is aiding her and sworn to silence to all others, the ensign discovers a letter she has written for her pursuer (knowing the Emperor would send someone to find her) and a story she has composed which includes the next clue to her whereabouts. After two further stops, and clues, eventually the two meet and she explains that she is in search of the origin of aether, that essence that defies all other elements and rises in the air rather than being a slave to gravity, for she believes that it holds the key to bringing magic into the world. The ensign is then torn between his sworn duty and an adventure with this naive dreamer of a young woman, for she has evidence that on a certain chain of islands may lie the secret to aether.

This is a charming novelette, pastel colors innocuously washing the tale in a comfortably benign atmosphere, with the niece’s clues in the form of a story featuring a little boy with a gem in his forehead befriending and having adventures with djinns, giving the tale a nice touch of the exotic flavor reminiscent of the Arabian tales we all know and love.

While the ensign’s personal story arc is completed and is enough to end the tale satisfactorily, the further adventure in search of the isles where aether is calculated to reside and where magic may be found, remains unanswered. Thus, this reads like the opening chapter in a forthcoming novel. If this novelette is any indication, and a novel is in the works, then it bodes well for a pleasant read indeed. Who can deny the attraction we have for those who adventure and quest in search of dreams, and magic?

Alec Austin‘s “Blood Reckonings” is a well-wrought little sword & sorcery tale set in a medieval past similar to our own but obviously different, where the Church is the overriding (and corrupt) power, numerous popes and their minions vy for this power, and there are those who in the name of the Church and to secure their own riches, favor, and standing, will stop at nothing to thwart those who oppose them.

The story opens with an Abbess and her armed coterie breaking into a mausoleum at night while part of the nearby city burns with the flames of rioting. They seek to secure a certain object containing magical properties that will aid their cause, only to be followed and accosted by a certain self-interested Friar Major from an Order who desires the same object. Swordplay and a bit of sorcery ensue, making the Abbess and her crew’s escape possible, though this isn’t quite the end of the tale. That I will leave for the reader to discover.

While there is nothing exceptional—or perhaps out-of-the-ordinary is a more accurate description for this kind of specific sub-genre tale (S&S)—to recommend this story over others of its kind (this is not necessarily a bad thing, for many S&S stories are quite effective; ask fans of Robert E. Howard or Fritz Leiber for but two examples), it nevertheless hits all the right notes, providing a dark and atmospheric piece sure to please readers (count me as one) who like descents into cold, labyrinthine catacombs in the dead of night, grave robbers, sorcery, and political intrigue.