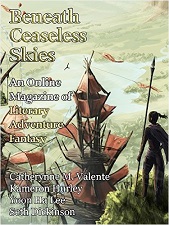 “The Judgment of Gods and Monsters” by Kameron Hurley

“Laws of Night and Silk” by Seth Dickinson
“The Limitless Perspective of Master Peek, or, the Luminescence of Debauchery” by Catherynne M. Valente
“Shadow’s Weave” by Yoon Ha Lee

The special 200th issue of Beneath Ceaseless Skies has four original stories.

“The Judgment of Gods and Monsters” by Kameron Hurley

This science fiction novelette is set on a distant planet. Here peaceful humans must fight off the Enemy every two hundred years in a brutal war. But if the people are truly peace loving, how should they readjust at the end of the war? Sometimes that adjustment can be as harsh as the original war. Hurley raises some intriguing ideas in this story.

Though I found the opening to bog down, in the end it was a worthwhile story to read. The story’s POV was confusing at times, but the author was slowly revealing the hard truths this society had to deal with. The story came together to present some thought provoking ideas and is a recommended read.

“Laws of Night and Silk” by Seth Dickinson

Dickinson’s fantasy involves wizardry in a war where the Cteri people protect their dams and water against an annual invasion from the Efficate people who have little water. Kavian is the foremost wizard and must train her rival wizard’s daughter, Irasht, to be an Abnarch, a weapon against the Efficate armies. Contrary to custom, she does this with compassion even as her rival trains her daughter in the traditional way.

The story touches on many aspects of callousness and compassion as the war progresses. In the end, Kavian is able to save Irasht, and mindful of the unfairness of the treatment of all Abnarchs she asks Irasht to make a choice to continue the practice or use her power to destroy it forever.

An interesting twist on the power of magic, it is written in an easy and engaging style. We are left wondering which side is really the good side, and who the villains are. There are no black or white choices in this engaging tale.

“The Limitless Perspective of Master Peek, or, the Luminescence of Debauchery” by Catherynne M. Valente

This erudite short story is a fantasy about Cornelius Peek, a woman who dresses as a man and discovers that she can make glass eyes that allow her to see what the recipient sees. Blessed with several inherited traits, including extraordinary longevity, she lives a secret life using her gifts to enrich herself.

Valente’s story craft, the depth of her use of language, creates an unnecessarily complex story. A century ago, successful writers produced such convoluted stories because reading was one of the only forms of entertainment. Today, writers compete with television and the Internet and to be successful must write fast-paced stories that read well and expand our horizons. This story is none of these.

The vocabulary is broad but gets lost in the convoluted sentences as the author adds clause after clause to sentences until the reader’s eyes are at risk of glazing over. The plot itself boils down to subject matter that others have explored many times and offers few if any new insights.

This fantasy short story introduces the reader to Tamalat and Brio, two erstwhile lovers. Brio has lost his soul and shadow, which Tamalat wants to restore against his wishes. In the depth of winter, she seeks help from a priest, who instructs her to knit a shirt for him that will return his shadow. Brio struggles against the plan, even trying to kill his ex-lover, but in the end she forces the shirt on him.

Disappointed at the failure to restore his shadow, they set off for the next town until a blizzard traps them. Forced to build a shelter Tamalat discovers that Brio has at least had his soul restored.

A story that reads okay, but the plot does not go anywhere. It’s as if the author has given us a short peek into a longer story that reaches a climax later.