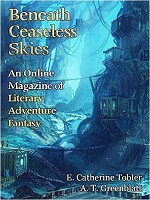 “They Said the Desert” by A. T. Greenblatt

The 199th issue of Beneath Ceaseless Skies has two original stories.

This fantasy novelette is about Vasily, a gifted tightrope artist who alone can ‘see’ wires in the sky to walk upon. Believing these wires could lead to another dimension he travels along one. Witnesses believe he is walking on air but he sees another walker moving on the other side of the wire, under him. Intrigued by the other walker, Vasily finds a way to cross to another dimension, where he finds others trapped there.

Tobler presents an interesting approach to the multiple dimensions or universes idea. But with just a few problems and mysteries for Vasily, there isn’t enough depth to sustain a novelette length story.

“They Said the Desert” by A. T. Greenblatt

Greenblatt’s fantasy and science fiction story is set on another world where a vast desert of dust separates two competing cities. The cities must trade to survive, relying on a few ‘crossers’ who risk their lives taking goods across the desert. One such crosser is Jade who took over her lover’s route when he failed to return. The desert is a strange place, where the ghosts of lost crossers exist, and the desert itself seems to get involved. Jade is making a special crossing, carrying something that may eliminate the need for crossers, when she encounters the ghost of her lover. Will he help her or stop her?

The action moves along at a nice pace and the story reads easily. Overall, this is a good original piece of fiction.