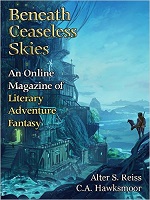 “The Stone Garden” by C.A. Hawksmoor

Ierois III Kaniour is an Emperor in exile on a small, unnamed island on the Sea of Dreams in Alter S. Reiss‘s “Sea of Dreams.” Dethroned long ago, Ierois is familiar enough with the beautifully deceitful sea to not be taken in by the flashes of fancy and little ephemeral gifts from his former life. There are no diamonds on the island. There is nothing but rock and sand and sea junk and lies. But when a supply ship comes to the island baring another unfortunate former ruler, Ierois is faced with a decision: destroy the hope of a child or take part in a foolishly futile search for past glory.

“The Sea of Dreams” begins with a lie that should keep readers on their toes, however the story pulls us in so completely that soon even we are victims of the lie. Suspension of disbelief makes it easy to lose sight of the core element of the story, which makes the final scene so much more delightful and cunning. The beginning is somewhat difficult to read. Awkward punctuation chops up the cadence and makes it a bit difficult to find a foothold. Fortunately this isn’t continued throughout the rest of the story and the reader is easily swept away by the sea and all its falsehoods.

In “The Stone Garden” by C.A. Hawksmoor, Gwyn is a long way away, spatially and temporally, from the wars and the bloodshed on his hands. Before him now is a ruined wall, a collapsed roof and rotten beams, all in need of hands to stand it up again. But at its heart, the stone garden, untended and left to go to seed contains the power of memory that refuses to let the past rest in Gwyn. Now, with faithful Mercher gone and nothing but a ruined foundation and painful memories around him, Gwyn must relive his past while building his future.

Told in small vignettes that weave in and out of past and present, “The Stone Garden” can be a bit difficult to keep track of in places. It takes reading to the midpoint to have a firm grasp for when things take place in each scene, and it may take a little back reading to piece everything together. Hawksmoor does a lovely dual job of world building and foreshadowing with the definitions of the stones at the beginning of each scene. I found myself wanting for a bit of direct impact from the stone garden on the plot, but much of the narrative is indirect and inferred and, I suppose, open to reader interpretation.