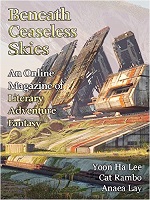 “Call and Answer, Plant and Harvest” by Cat Rambo
“The Right Bright Courier” by Anaea Lay

Beneath Ceaseless Skies publishes “literary adventure fantasy,” “stories with a secondary-world setting and some traditional or classic fantasy feel, but written with a literary approach” according to Publisher and Editor-in-Chief Scott H. Andrews. “We want stories set in what Tolkien called a “secondary world,” that is, some other world that is “different from our own primary world in some way.” Invoking Tolkien (in my book) sets the bar high for secondary world settings. I am looking forward to the journey.

“Foxfire, Foxfire” by Yoon Ha Lee is a truly magical story. Set in another time, in another place (on another world?). Baekdo is a fox. A magical fox with the ability to speak to and make deals with the gods. He is on a mission to permanently gain human form, which requires a bargain with the gods and requires that he eat the livers of 100 humans. This also results in him inheriting the knowledge and skills of each human he consumes. He has consumed 99 and has chosen to consume the pilot of a battle mech for the final sacrifice but things do not go entirely as planned. Baekdo ends up swearing on the blood of the tiger-sages that he will keep his bargain with Jong, the female Cataphract pilot. Even with his oath, things do not turn out as expected. “Every death is a choice, little not-a-fox. At any step you could have turned aside.” Now Baekdo is on a mission and has nine years (nine is a sacred number to foxes) to justify his choices. I was fully immersed in this story and fully invested in the characters. A unique story with both Science Fiction and Fantasy elements set in a new world. I would love to see more, a lot more, from this author.

“Call and Answer, Plant and Harvest” by Cat Rambo is a rather rambling tale of Chaos at the hands of Cathay, a Chaos Mage in the city of Serendib, a city “made up of odd pockets and uncomfortable niches from other dimensions, a collision of cultures and technologies and economies like no other anywhere.” After living in the city for nearly a decade, in the blink Cathay “sees a smooth shoulder, a fall of rainbow hair, eyes of earth and amber. Mariposa.” Together, Mariposa leads Cathay into a trifecta of chaotic challenges. First to a gambling den to capture a gem in what could only be described as Spy Kids 3 meets LSD in a cage match battle against a golem cyborg. This quickly transforms into Treasure Planet meets Sharknado where Cathay battles a water mage pirate before transforming into Dante‘s Inferno meets Sarlacc pit where Cathay survives being lowered into the pit of chaos with unknown consequences before returning to Mariposa who, it seems is Cathay’s own creation. A chaotic ride without clear direction only to return to a chaotic “Jack and the Bean stalk.”

“The Right Bright Courier” by Anaea Lay is the story of he that is the 15th Bright Courier. I must quote extensively to explain what the Bright Couriers are. “The Bright Couriers were founded two centuries ago to answer the challenge posed by the Palace of Abandoned Dreams. They do not recruit. They do not train. Their initiates find them by accident, wandering rootless and unattached until they stumble into a Courier temple. They must have hopes, desires, longings, but they may not have attachments. They must sacrifice, but it should not be painful. Initiates are tested, and when they pass, they give up the elements of themselves they want to imbue their ship and with those elements, their ship is grown. With that they create their first, their only attachment, because an anchor to their ship is a tie to themselves, and Couriers without attachments to themselves cannot be trusted. The ether is deep, and space is wide. The truly unattached will never find their way.” He sacrificed a part of his heart and his gut to have his ship, the Shalott, grown for him so that he could sail to the shores of the Palace of Abandoned Dreams to deliver its package, to whom he will deliver it, but what the package contains is never explained. The story is a glimmer, ether smoke of the thought that giving away everything of yourself will only find yourself lost and alone with your dreams and without your journey’s attachments. I found it both glad and sad with discovery and loss and futility.

I have enjoyed this issue of Beneath Ceaseless Skies. I found an amazing story that I hope will be continued and others which led across boundless chaotic imagination into places of our own creation, filled with dreams and attachments to the past. I hope you enjoy it as much as I have.

Eric Kimminau is a BBS geek turned IT professional seeking those of like mind and character with whom I may share in wit and wisdom.