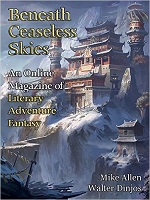 “The Mama Mmiri” by Walter Dinjos

In Mike Allen‘s dark fantasy short story “Longsleeves” Merav wakes up after her gruesome murder by a group of men in the unexpected shape of a half human, half fox. She quickly realizes that she lives inside a sanctuary made by Olderra, the powerful witch who revived her, in the middle of an enchanted forest. At some point, she will try to look into her death and Olderra’s role in her transformation. As much as she wants to know, though, the monster Longsleeves is banning her from discovering the truth.

Each one of the characters is unique, something achieved through their dialogue and reactions, and the descriptive setting, inside and out of the witch’s sanctuary, is more than satisfying. Similarly, the spells are so mystical and successfully portrayed they give the impression that magic exists. The combat scenes are well drawn as well, with such a suspenseful and realistic tone that they bring a sort of balance to the story’s core fantasy theme.

In the second short story, “The Mama Mmiri” by Walter Dinjos, we travel to a village near Ofia river, in which the villagers are sacrificing a pair of goats once a month to Mama Mmiri, the mother spirit of the river. The story’s protagonist is a young man who has lost his twin brother Ugo following a tragic accident. However, he believes Ugo’s death was not accidental and that his twin was murdered by a devious man called Baba Tunde. During his quest to deliver justice for his brother‘s death, he will discover a dreadful pact made between Baba Tunde and Mama Mmiri. The story’s pace was so fast that I found it difficult to stay with it, and the author uses a dialect unknown to me which made it hard to sympathize with the protagonist, even if he wass suffering. Lastly, the final twist is not explained sufficiently well to provide a satisfying conclusion.