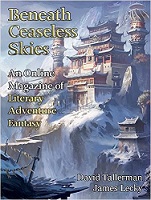 “A Killer of Dead Men” by David Tallerman

“So Strange the Trees” by James Lecky

The last two stories from this magazine in 2015 are a rather weak ending to this usually excellent periodical. We begin with “A Killer of Dead Men” by David Tallerman. A great title with a rather pedestrian story to follow, I fear. It concerns an assassin (of course of a guild of assassins) named Otranto who is hired to kill a man named Vixara. Vixara is wealthy, handsome and a foreigner. With dispatch Otranto does so only to find that the man is still alive the next day. So, Otranto, with his head on the line from the guild’s other assassins must try again until all is resolved. Unfortunately this interesting scenario is not very interesting in the telling or resolution.

The second story, with another fine title, “So Strange the Trees” by James Lecky, is a pastiche of Fritz Leiber and Jack Vance with a dash of Greek mythology thrown in. Two fellow rogues, Alquen and Engarten are on the road as the “Parasheeva Blossoms,” the sworn virgins of a goddess, are passing by. Alquen catches a glance of one of them and falls instantly in love. So it seems does the virgin. The story revolves around this situation. Unfortunately it is rather drably told and fairly predictable.