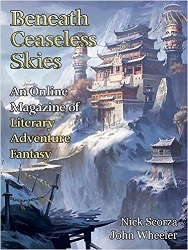 “Eyes Beyond the Fire” by Nick Scorza

“The Rest Will Blur Together” by John Wheeler

Beneath Ceaseless Skies strives to print literary adventure fantasy and these first stories in December are excellent examples of that.

Nick Scorza is a writer unknown to me but with “Eyes Beyond the Fire” he has written an excellent adventure story dealing with fallen gods, broken love affairs and magical spells. Lys is a common girl who became a mercenary warrior and somehow won the love of a Countess. At the story’s beginning she has been sent away from the Countess and ships out on a trader heading for the outer colonies. The tale plays out onboard with a cast of characters that wet the appetite for more stories set in this world. Friendships are made, catastrophe strikes and old powers are awakened and Lys’ past life is explained. This one is full of adventure and told in a style that is pleasant to read.

“The Rest Will Blur Together” has a little bit more on its mind. Again, I am not familiar with its author, John Wheeler, but he does not disappoint. Melika is an older woman who awakens every morning to words she has previously written on her wall: “I am Melika. Widow of Ovro. Mother of Chyra and Hulo, may Aehle warm their souls.” Melika has the gift of taking away the undesired memories of those in need. In the years she has been doing this she has buried her own memories and reminds herself of who she really is each morning with her charcoaled lines and her journal. This morning a man comes to get rid of a memory about a friend being killed in the process of thieving a bag of guilders. The next day a woman named Caltha comes to beg her to give that memory to her because the bag of guilders the thieves were stealing is all she has to feed her children. The story rests on the dilemma that Melika faces. She has vowed never to give away another’s memories to anyone else but Melika’s own memories of her two children taken from her pull at her to comply. This is less an adventure story but a coming to terms with our lives and our promises. It goes in interesting directions and will warm your heart. Very nicely done.