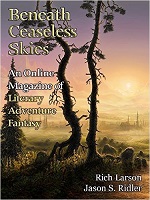 “The Delusive Cartographer” by Rich Larson

Rich Larson’s story “The Delusive Cartographer” tells the tale of two rogues; one of whom infiltrates a prison in an attempt to find a treasure map. The result both is and isn’t what they hope. Set in a world somewhat reminiscent of Fritz Leiber’s Lankhmar, the story is richly written with a tendency to play hide and seek with clues and partial clues hinting at stories untold. The pace of the story fits the constant references to the sea and sailing that dominate the text and the ending, while predictable, is satisfying. The deeper message about regret and redemption plays well with the overall story.

Written in the style of recovered documents, “Spider’s Ink” by Jason S. Ridler recounts the conflict of two colonial powers over an archipelago and the role Daru Heriz plays in the rebellion of the previously subjugated tribes. Heriz, depending on the writer, is a healer, spy, fiend or defender of the people. The nearly dozen different entries paint a complicated and deliberately vague picture of the protagonist. While technically very well done, the story lacks punch. The final scene, a callback to the opening, feels trite and lacks the organic connection needed to really work well. I think the story is simply too short to work as intended, which is a shame considering how well it is written.