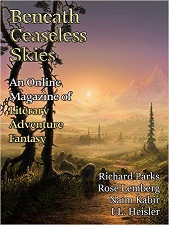 “The Bride Doll” by Richard Parks

“Geometries of Belonging” by Rose Lemberg
“The Four Schools” by Naim Kabir
“The Sons of Vincente” by   I. L. Heisler

In “The Bride Doll” by Richard Parks, two Japanese priests travel to a border town to avert a war by recovering a missing bride doll. The supporting characters are described as over-worn tropes (the lecherous alcoholic, the beautiful female demon, and the star-crossed lover) and the plot lacks convincing confrontation or transformation.

“Geometries of Belonging” by Rose Lemberg is told from the perspective of a depressed healer who struggles with his own power of agency while those in power belittle him for his sexual preferences as a submissive homosexual. Lemberg overlays strong themes of consent and identity with enjoyably complex characters and setting, deftly introducing each element in its proper time. A surreal magic system reflects on the characters’ diverse personalities while providing a sense of otherness.

“The Four Schools” by Naim Kabir follows reincarnated monk Arzey as he hunts psychopath Garza the Provoker though their many lives. Each time they meet, Arzey’s Task is to convince Garza to commit suicide before Garza’s soul awakens and chooses a victim. When Arzey falls in love, he begins to question his Task, and thereby brings the moral quandary of his Task to a head in a final confrontation with Garza. Kabir brings the reader engaging characters and a thoughtful story that dares to leave questions unanswered.

In “The Sons of Vincente” by I. L. Heisler, a quarry man saves toddler Calvino from the hunters who killed Calvino’s mother for her medusa-like powers. When Calvino later travels to the city to further his craft as a stone sculptor, he learns more about his mother’s death and about himself, and the morally ambiguous plot comes full circle. This story of poetic justice ends on a satisfying note of a well-kept secret.