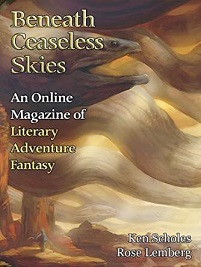 “The Girl with the Golden Hair” by Bonnie Jo Stufflebeam

The stories this month are good stories but lack that something extra that would make them great.

Bonnie Jo Stufflebeam has given us a variation on Snow White with “The Girl with the Golden Hair.” It concerns a girl called Oovis born with hair of real gold. Queen Loreen (as are all evil queens) hates her for this. She makes life difficult for Oovis and her parents. Oovis has only the centaurs as friends. One of the centaurs is the narrator of this story. Eventually the Queen forces Oovis to travel to the mountains in search of the root of immortality.

This is not a badly written story but is pedestrian and unexciting. It is just another story.

“Court Bindings” by Karalynn Lee is a step up from the previous story. It is again a fable but a different one – one not based too closely on a known fairy tale. It is told by the woman who is the princess’s bodyguard and teacher in a country where magic is possible.

The narrator is interesting and complicated. She tells the story as if she is talking to the princess. The princess’s magic ability is the ability to bind animals to her will, but to only one thing. She begins with a spider (which she makes write her name with a web), moves on to more and bigger animals as her defender watches and tries to curb her over-enthusiastic use of such powers. This tale takes under consideration the uses of power and the responsibility that attends it. It is well done and I hold out hope for the author in the future.