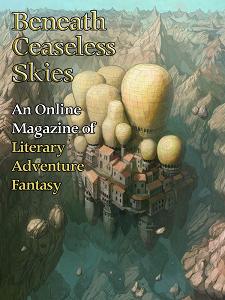 “The Wizard’s House,” by Stephen Case
“The King in the Cathedral,” by Rich Larson

In “The Wizard’s House,” Stephen Case takes us to a world in which people fish for floating jellies in the sky, an unborn thousand-eyed god slumbers in a cathedral, and a sky-dwelling wizard changes the course of a war and possesses the ability to cure ailments. But a high price accompanies the wizard’s healing. This soft and shimmering, post-War of Sixteen Saints fantasy world shows us life in the aftermath on the losing side of a major conflict between the renegade Saints and an Emperor with a god as an ally. This god, while not yet born, threatens to control parts of the natural world, including, perhaps, the jellies. Goya, a friend of the protagonist, Diogenes Shell, finds a sword belonging to a captain from the wars. The sword also functions as a guide to the house of the wizard, which floats invisibly in the sky. Taking possession of the sword from Goya, Diogenes and his father, Bartolome, set sail into the air in order to discover who sabotages their kites, which support the nets catching jellies. After a jelly attack, which leaves Bartolome gravely wounded, Diogenes uses the sword to locate the wizard’s house and ask for help. “The Wizard’s House” is engaging, although I feel as though the tale just begins at the ending. What truly stands out in Case’s story is the imagery, which astounds and delights.

“The King in the Cathedral,” by Rich Larson, presents another tale of life after defeat and yet another cathedral. In this case, Fawkes, the brother of a king, is imprisoned in a cathedral on the outskirts of nowhere by the Illusionist, who killed the king and now rules the kingdom. Fawkes spends his days reading books on strategy and playing war games with an iron automaton named “Otto.” Fawkes’ exile is interrupted by the arrival of a young woman named Eris, who wants Fawkes to lead a rebellion, seize the throne, and relieve the kingdom of the oppression of the Illusionist. Eris, hoping to find a hero, discovers instead someone very human and carrying a great deal of baggage. Fawkes plays a war game with his automaton gaoler. The winner will be crowned the Everlasting Master of Games and undisputed Eternal Ruler of the Cathedral. I won’t reveal the results of the contest; suffice it to say that a newly empowered Fawkes emerges. I enjoyed this tale. Yet, here too I thought that the real story is just beginning.