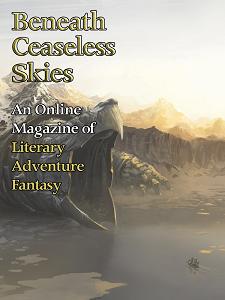 “A House of Gold and Steel” by Marissa Lingen
“Goatskin” by K. C. Norton

In “A House of Gold and Steel” by Marissa Lingen, the narrator becomes a nurse’s aid for a mute invalid who is being taken advantage of because of her unique magical powers. The moral dilemma and the strength of the narrator’s character effectively drive the story but lead to an anti-climactic ending that could use more of an emotional punch.

In “Goatskin” by K. C. Norton, shape shifter Shanzi becomes an indentured servant for the most beautiful woman in the world, who soon requires Shanzi’s help in an unexpected emergency. The plot comes off as unnecessarily lengthy because of Shanzi’s many ineffectual attempts to save her mistress, a common structure for fairy tales. The characters and the magic are intriguing, written with a thoughtful flair of internal dialogue such as one comes to expect from K. C. Norton.