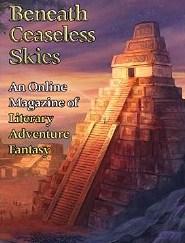 “The Leaves Upon Her Falling Light” by Gregory Norman Bossert

By way of stories told by various birds to a goldfinch chick, we learn the story about the strange relationship between Tallys of the Wild and Hugh, a young prince when we first meet him. Their initial meeting has a lifelong impact on Hugh, following him through his kingship, eventual marriage, and death. This is a heady piece that, although linear in the telling, may not make much sense until the end.

“The Rugmaker’s Lovers” by Brynn MacNab

A woman weaves her house from her loom, imbuing it with the magic of stories, curiosity, and nature. After receiving wisdom from the village wise woman, and a blessing from the priest, she takes up residency in her new home. Eventually, she marries and is content though the man she weds is not her first love. Everything in this simple, easy read builds on what came before it, much as the house that Jack built.