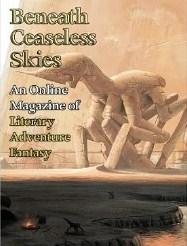 “The Topaz Marquise ” by Fran Wilde

“What Needs to Burn” by Sylvia Anna Hiven

Marcus, the main character in Fran Wilde‘s “The Topaz Marquise” purchases a purportedly magical gem from a desperate man, planning to cut the large stone into three smaller pieces to sell at a steep profit. As the story goes on, he isn’t able to bring himself to cut it, and loses hours of time every time he sets out to do so. The writing is solid, and there is an effective sense of creeping dread as Marcus falls under the gem’s control. The romantic elements in the story worked very well, but I had a hard time caring much about the characters.

I had a similar problem with “What Needs to Burn” by Sylvia Anna Hiven. Utah Sullivan is travelling with “his savage,” Shadow, through a magic-twisted desert. Their horse dies just outside of a dying town, and the local sheriff forces Utah to send Shadow off to find a water-producing mermaid to put into the dried-up well. Utah spends most of the story sitting around, until he decides to take a stand at the end. The voice and descriptions were lovely, but I just didn’t care about the characters.