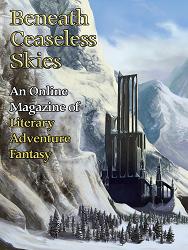 A great issue of Beneath Ceaseless Skies, with two multi-layer stories with very different themes and subjects.

“The Year of Silent Birds” by Siobhan Carroll is a morbid fantasy that follows Lady Rehlite as she is summoned from her grave to aid the descendents of her house in a deadly political game that is thinly connected to her own death. When Lady Rehlite rides into town disguised as her living sister, what she cares about most is not the schemes of the dead and living, but saving her young nephew, one of her few remaining kinsmen, from the man who orchestrated her murder and the fall of her house.

Most interestingly, Lady Rehlite faces certain limitations to her knowledge and power as one of the dead. For instance, while among the living she cannot remember her experiences in the realm of the dead, including the conference that must have led up to herself being chosen to answer her sister’s summons. And while she can remember much of her life before her death, she lacks any otherworldly knowledge of the behind-the-scene machinations that drove her demise and now conspire against her nephew. This makes her character truly other, separate from the land of the living and the land of the dead by both a lack of knowledge and a sharp difference in goals. Most of the other characters seem to desire to secure or advance their station. All Lady Rehlite cares about is saving her kinsmen from the same foolishness that ended her own life. This makes for a riveting story above and beyond the political scheming, which some may find a little difficult to follow.

“Engine Song” by Nathaniel Lee is a weird western that begins when Ambrose returns to town from a hunt and finds the whole town in a tizzy: the trains have sprouted legs and walked off. The incident is so baffling and so instrumental to the town’s future that the townsfolk quickly go from disbelief to blind reaction, and Ambrose is the first volunteer participant. But as Ambrose tells the reader, he may not be as in love with the town, where his drunkard of a father abandoned him and his sister, and its future as a bare-bones way station, as the rest of the posse.

Nathaniel’s expressive prose and dialogue verges on comedy in places, and will speed you down the track to an unconventional surprise ending. An entertaining read that delivers on character development.

“Evensong, Having Been Answered” by Dean Wells
“Sweetwater Notion and the Hallelujah Kid” by K.C. Ball

In “Evensong, Having Been Answered,” Dean Wells tells the story of Willem, who abandoned his musical group to play with another on the night that they are lost at sea. He killed himself out of guilt, and has been re-experiencing the same scene over and over at the whim of unseen clockwork masters. But something in the scene finally changes, and he allows himself to move on. The language is lyrical and the descriptions are poetic and lovely, but the language distracted from the storytelling instead of complimenting it.

“Sweetwater Notion and the Hallelujah Kid” from K.C. Ball stars Jack London on the moon. Tycho City is preparing to welcome Teddy Roosevelt’s first lunar visit when London’s friend, the Hallelujah Kid, greets his lost love disembarking from the shuttle from Earth. But she’s married to a rich bully with a bodyguard in a mechanical suit. London struggles to get his columns for the local paper written while helping his friend rekindle his old romance. But things aren’t as they seem, and the pair end up scrambling to save both the president and their home. The tone matches the setting perfectly, and overall, the story is a lot of fun.