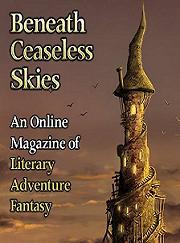 Under the former monarch, King Ashmedai, Pheth had painted frescoes on the palace walls. The new ruler, Queen Mashit, has different ideas and now Pheth is responsible for cooking birds for her. Though he is a demon, Pheth abhors the fact that he has become a slaughterer. To make matters worse, his poetic soul makes him an excellent chef. The hardest part of the job is killing the birds, brought in through magic portals, himself. Each flock offers their necks for him to break and leaves behind a chick. Thus starts the aviary which Pheth must keep secret from all the other demons and, of course, her majesty. Even for a demon, this is hell. The humorous tone adds just the right touch of levity to a story that offers a few surprises to go along with some of the unanswered questions. Despite an ending that brings the story full circle, the tale seemed to be missing something.

“Not the Worst of Sins” by Alan Baxter

The first few paragraphs here heap on revelations that take this from a standard Western to a speculative story about a young man travelling with a ghost, both of them seeking revenge on the same man—the boy’s father. As the story progresses and the two travel toward their goal, they encounter a Sherriff who jails the eighteen-year-old for murder. After killing a preacher and breaking out of jail. The youngster and his ghost friend also meet a fat bartender who seems to have their best lead yet. Following up on that lead, the two come across a small prospector camp. Determined, based on nothing more than name recognition, that one of the prospectors is, in fact, the person for whom they’ve been searching, the boy confronts the man. The ending twist is a head scratcher that leaves one wondering whether there was ever a point to the story.