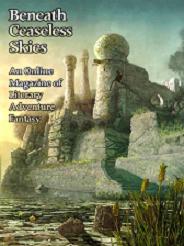 “Cherry Blossoms on the River of Souls” by Richard Parks
“Walls of Skin, Soft as Paper” by Adam Callaway
“The Coffinmaker’s Love” by Alberto Yáñez
“Blow ‘Em Down” by Rebecca Gomez Farrell
“On the Origin of Song” by Naim Kabir

“Cherry Blossoms on the River of Souls” by Richard Parks

Hiroshi is a young Japanese boy fascinated by the music he hears coming out of an old dry well—music that only he can hear. His uncle, a priest, confronts Hiroshi about the obsession and asks him to consider doing the things that children do rather than listening to the well. Being a dutiful child, Hiroshi tries. The call of the well and its music is too strong for him. One evening he sneaks away to the well to investigate and finds his uncle hidden there waiting for him. Realizing that Hiroshi is compelled to learn more about the music, the elder assists Hiroshi, after making him promise to come home after he has satisfied his curiosity. What Hiroshi finds within the well is a land rich in Japanese mythology including oni and dragons. This is a fast read with a slow pace that suits the story.

“Walls of Skin, Soft as Paper” by Adam Callaway

Some wonderful imagery, “dark as the night sky seen through closed eyes,” for example, exists in this esoteric tale. As well there is a bit of point of view shifting where the primary character, Tomai, a lampblack miner, suddenly knows that another character’s ribs are broken though the breaks aren’t obvious and Tomai is not a psychic. The short version is that Tomai goes home after work. Beyond that, he breaks up a fight along the way. Home is Bugspit, a place where corridors wind “around, up, and down, rearranging themselves by the day.” At home, his wife awaits him. The descriptions of Tomai and his wife come at this point. These are such interesting-looking people that Tomai should have been described much earlier. By the end of the story it felt as though nothing of interest had happened. It could have been compelling if it had been resequenced with descriptions coming first and the fight scene cut altogether since, though it gives us a small but irrelevant insight into Tomai, it the adds no real value to the story.

“The Coffinmaker’s Love” by Alberto Yáñez

There are a number of surprises in this story. It begins with Miss Lavinia Parrish, a young woman when she approaches Mr Harid de Borba, “a coffinmaker of great skill but odd repute,” to become his apprentice. Lavinia is a gentlewoman and the youngest child of her wealthy family. Being a tradeswoman is considered beneath her station. However, because of her age and other life details, Lavinia’s family indulges her interest. It is not until the end of the first section, where we learn the reason that Lavinia has chosen to learn coffin making, that this story reveals itself to be one that has chosen a tantalizing appetizer of a starting point. From there, it goes into a linear telling of how the starting situation came to be. Lavinia, not de Borba, is the coffinmaker of the story’s title. Who her love is comes as another surprise. Astute readers might guess but confirmation does not come until later in the tale. This is a story to be savored rather than rushed in any way.

This is a science fiction story rooted in religion and history. After wandering a desert in space, following first Moses, then Joshua, for more than forty years, a group of Yahweh’s children—adults now—enters Jericho. The city is an impediment that they must overcome in order to make their way to the Promised Land. Under Joshua’s guidance the soldiers, priests, and chariots parade through the city for six days. The band, the Parched Priests, is directed to carry, but not play, their instruments. On the seventh day, instead of resting, they are to march as they have before for six laps throughout the city. When they get to the seventh lap, which they will note by the children waving flags, the Parched Priests are to play “loudly, all at once.” Joshua does not explain his strange directions, but his people follow them nonetheless. The result…well, that would be giving away the story. Those who most understand the religious references will enjoy this story.

“On the Origin of Song” by Naim Kabir

Here we have an intricate tale that interweaves narrative, epistolary elements, poetry, and fictitious interviews. The subject of the story is a mysterious being, Ciallah Daroun, whom we later learn is a “Stone Slave” or golem. He travels from place to place researching the roots of Music and Song, something his people cannot create. The quest enrages some scholars and raises suspicion among the military because if stones can learn to produce music, it might threaten the “normal” order of things. Why an investigation of Daroun is ordered, and the relationship between the inquisitor and the subject is only made clear at the end of the tale. This tale will be enjoyable for those who enjoy stories about characters who, in this case literally, march to the tune of a different drum.