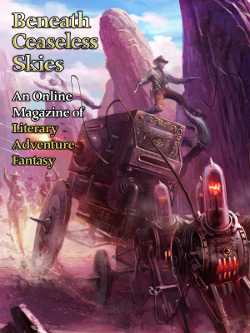 I’ve been reviewing Beneath Ceaseless Skies a lot in the past few months and their September 6 issue is the strongest of the lot.

“When Averly Fell from the Sky” is set in a dark, steampunk England.  Dean Wells concentrates on the dirt and grime of the era with the story of Marcel Saint-Jean, a photographer whose carriage ended up in a canal.  He’s fished out by Doc Faversham, who formerly constructed mining robots, and now has made Saint-Jean his prisoner.  As to why — well, that’s what the story is about.  This mixture of steampunk and horror goes in surprising directions and is not just content with solving a mystery, but of showing its ramifications.

Don Allmon‘s “Bandit and the Seventy Raccoon War” takes place in a fantasy setting in the middle of a war, during an attempt to attack Cesler Grange.  The Grange can usually fend off these attacks, but Jacsen discovers that the attackers have hired a witch, which means all bets are off.  With a young boy he rescued, he tries to defeat the witch.  Jacsen has some hidden secrets — hidden from himself as well as everyone else — that come in to play in the battle.  Good characterization, a clear prose style, and a strong plot combine to make this story a winner.