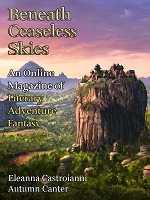 “Their Eyes the Shape of Orchids” by Eleanna Castroianni

“The Shapeshifter’s Lover” by Autumn Canter

The narrator of “Their Eyes the Shape of Orchids” by Eleanna Castroianni receives a visit from a woman who fears that her unborn child is doomed to be a supernatural being. Unknown to the pregnant woman, the narrator intends to finish a life-long effort to bring entities from another plane of existence into the world. Both characters are surprised when the child is born.

I have explained the plot of this story badly, partly because the setting is a complex one and the premise is hard to understand. The author shows great originality, but some of the concepts are unclear. Readers willing to study the text carefully and ponder what they read will best appreciate this difficult work.

In “The Shapeshifter’s Lover” by Autumn Canter, a young woman is seduced by a man who can take the form of a crow. He deserts her after she becomes pregnant. Knowing that she has lost him, and that her child will fly off to join its father after it is born, she deals with the situation in her own way.

In sharp contrast to the previous story, this work has the clear, simple style of a folktale. The protagonist’s dilemma is one with which readers can empathize. The conclusion is both unexpected and appropriate.

Victoria Silverwolf is childfree by choice.