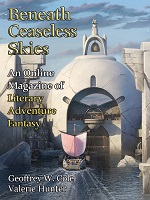 Two stories set in pasts that never existed appear in this issue.

“River of Sons” by Geoffrey W. Cole takes place in a magical version of the First World War. After the Germans conquer Belgium, an unknown person casts a forbidden spell that permits the user to control the souls of those caught in it after they die. The protagonist is a scholar of magic who faces the task of breaking the spell, while preventing the Germans from using its extraordinary power for themselves.

The story is full of fantastic elements, from unicorns and centaurs to beings from German folklore. Not all of these prove to be relevant. The presence of a character who has accidentally transformed himself into a duck suggests a mood of whimsy, but in fact the plot is mostly a deadly serious one, not shying away from the horrors of war. This shift in tone may put off some readers.

The protagonist, at first reluctant to use magic in harmful ways, eventually unleashes highly destructive powers. This adds complexity to the character, and a welcome touch of moral ambiguity.

As the title suggests, “How to Be a True Woman While Piloting a Steam-Engine Balloon” by Valerie Hunter fits firmly into the category of steampunk. The setting seems to be an imaginary version of the late Nineteenth or early Twentieth Century. The pilot of a small airship picks up a spy working for revolutionaries. A government balloon pursues them, intent on capturing the secret agent, even if it means killing the pilot and destroying her ship.

The scenes of battle between the two vessels are vivid and imaginative. The spy proves to be something other than an ordinary human being at the end. This adds an element of fantasy to a story otherwise lacking such content, but it seems arbitrary. The conclusion adds a touch of romance to the plot. How readers react to this may depend on how they feel about traditional love stories.