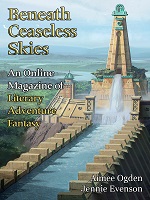 “The Mountains of Another World, Where Eagles May Fly Free” by Aimee Ogden

“Anything You Lose Comes Round in Another Form” by Jennie Evenson

The 355th issue of Beneath Ceaseless Skies has two short stories, one of which is a novelette.

“The Mountains of Another World, Where Eagles May Fly Free” by Aimee Ogden

An old fisherman flees from a sorcerer’s ravaged city in this short fantasy. Erohi has three eagles with him as he slips through the body-strewn streets to the harbor to sail away in his catamaran. He fears the Imperator’s sorcerers will stop him, but he manages to sail away on a favorable wind out into the depths of the sea.

Over the next several weeks, he and his eagles encounter all the perils that the Sea-Mother is well known for, and not all of them survive. By the time Erohi reaches his destination, he is tired of fighting life, but there is still one task he must perform.

The ending was poignant but keeping the story’s premise a mystery did not make for an engaging read.

“Anything You Lose Comes Round in Another Form” by Jennie Evenson

In this fantasy novelette, Pinar manages the sea for the nearby village. She is a sorcerer who keeps the sea within its bounds and producing fish to catch. But when she casts her spell each month, it costs a month of her life.

Her mother paid this price willingly until she died young. Now, it falls to Pinar to pay that price, except she’s reluctant to do so. Pinar chooses to stop casting her spells when she gives birth to a son who will take over after she has surrendered all her months.

Over the months and then years, the sea becomes petulant and stops providing fish to catch. Storms now rage regularly, making fishing a dangerous enterprise. Pinar can spend her time with her son, but the sea will find a way to extract its toll on the sea wizard.

The author’s plot was interesting and held the reader’s attention, though the middle part was slow to develop.