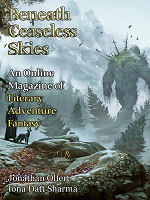 “To Embody a Wildfire Starting” by Iona Datt Sharma

The 346th issue of Beneath Ceaseless Skies has two terrific stories. One of which is a novelette.

So far, Serra’s husband has killed ten villagers in this short fantasy. Her millennia-old mother-in-law wants to find and stop her son. But her magic isn’t as good as it once was, and she now seeks to train Serra to end her son’s life.

But Serra hasn’t given up on her husband and the father of her unborn daughter. Can she find a solution that appeases everyone that she cares about?

This was an entertaining and well-constructed story.

“To Embody a Wildfire Starting” by Iona Datt Sharma

In this entertaining fantasy novelette, Tishrel is demi-asuric or a human dragon and a victim of a despotic government that cuts his tendons so he can never fly again. That brutal government finally falls, and Tishrel returns to his home in the Eyrie. But he fears his mother will never accept a damaged demi-asuric.

Tishrel’s mother is the Eyrie’s Almoner and part of the triumvirate that governs the Eyrie where the demi-asuric live with some real dragons. Though she is glad to see Tishrel still lives, she says his imprisonment is his own fault because he walked away from his duties to the Eyrie. Tishrel allows himself to wallow in self-pity for awhile as his mother roots out and executes sympathizers of the last government.

Then Tishrel finds a recent human convert who knows very little about being a demi-asuric, and he takes it upon himself to guide her.

The author’s narrative style beguiled the reader, allowing the character-centric tale to pass like a summer breeze, welcomed and then missed once it was past.