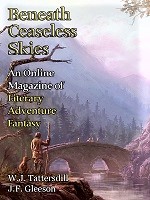 “Letters from a Travelling Man” by W.J. Tattersdill

“The Age of Swirling Mist” by J.F. Gleeson

As its title implies, “Letters from a Travelling Man” by W.J. Tattersdill is an epistolary tale. Missives from a young fellow to an older friend relate his experiences as he journeys from the mainland to a place where many islands exist, and sometimes break apart unexpectedly. The nature of his quest is not revealed until the end.

I have mixed feelings about the way in which the author conceals important information from the reader until the climax. On the one hand, it almost seems like cheating. On the other, it allows for an emotionally powerful revelation, and it is difficult to see how else this could have been accomplished.

The setting, a world in which a sea god tore the land into countless tiny islands, is interesting. The fantasy content is either overly familiar, such as elves and dwarves, or arbitrary, such as a sentient plant that has nothing to do with the plot. This is the author’s first published work, and it certainly shows promise.

The narrator of “The Age of Swirling Mist” by J.F. Gleeson lives with her father in the forest, isolated from other people. They produce wood carvings and wickerwork, which they offer to a trader who visits on occasion. While swimming in a nearby lake, the narrator meets a mysterious man who offers obscure advice. After a visit from the trader and his niece, she aches with loneliness, and has a strange experience at the lake.

If this synopsis seems vague, that is because much of the story is opaque. The man at the lake speaks in an incomprehensible way, and the narrator’s final epiphany, if that is what it is, is difficult to understand. The author has a gift for characterization and description, but tends to write in a style that is more suggestive than explicit.

The mood alternates between joyful and melancholy, the latter dominating. Readers are likely to be disappointed that the narrator, who yearns to see something of the world beyond the forest, is frustrated in her desire. (Her father says that they cannot leave the woods, but no reason is given, an example of the story’s lack of clarity.)

Victoria Silverwolf did not receive the daily newspaper today.