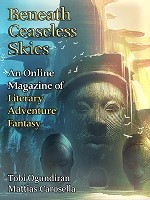 “Deep in the Gardener’s Barrow” by Tobi Ogundiran

“The Source” by Matitias Carosella

The 343rd issue of Beneath Ceaseless Skies has two good short stories.

“Deep in the Gardener’s Barrow” by Tobi Ogundiran

Iná flees through the dark forest from the raiders of her village in this short fantasy. Her mother abandoned her years ago, leaving Iná alone to look after her little brother. But unknown to Iná, her flight through the forest has brought her near the fabled Gardener’s home.

A woman rescues the near starving siblings and feeds them a sumptuous meal. So rich a meal that Iná almost retches. Iná grows suspicious of the woman, thinking her a witch. But in reality, she is far worse, and soon Iná finds herself in a battle for control of the Garden.

Though this was a well-constructed and entertaining story, its themes and POV seemed all too normal in the fantasy genre.

“The Source” by Matitias Carosella

In this short fantasy, Woriban is a tangama who can sense and even influence the magic of the mysterious land called the Heart. When a stranger interrupts her dinner to hire her, she is less than pleased. But the man’s offer is significant and timely, so she agrees to be his guide to find the Source, deep in the Heart.

Men are fools, and she expects this man is no different. Few, if any, can survive to return from the Heart. Two days into the cursed land, her client reveals things about himself that begin to change her mind. Things that may cause her to do things she promised never to do with a man ever again.

The author’s narrative had an inviting style. The story included many insightful comments, which created an engaging pace throughout.