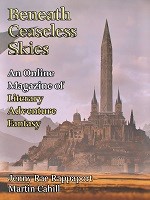 “The Shape of Wings and Feathers” by Jenny Rae Rappaport

“Those Virtues, Those Poisons” by Martin Cahill

“The Shape of Wings and Feathers” by Jenny Rae Rappaport tells the story of a young student magician who takes a final test, in her fifth year of magic school. Caught in a glass hemisphere containing a tree with acidic sap, she must find a way to escape. One would think that a tale of spellcasting, dimension-jumping and giant grandmothers would not suffer from a lack of realism, but somehow this short story doesn’t ring true in its details or in its characterisation. The main character welcomes pain to retain her clear head, but this overused idea rarely convinces—pain is awful, and one doesn’t seek it out. As the main character is not developed, the reader is given little reason to care especially whether she will escape or not, and we follow her attempt out of mild curiosity but little else. As a short story it is somewhat poetic, but a little shapeless.

The short story “Those Virtues, Those Poisons” by Martin Cahill recounts the tale of two brothers who go to the cave of a ‘titan serpent’, to undertake a traditional trial of strength and courage. The two-headed beast strikes one brother with a paralysing venom with one head, and the other with a hallucinating bite with the other head. The hallucinating man then must carry the other back to their village, and on the way, he experiences many hallucinations in his delirium. In this dream-like state, he must overcome his inherent cowardice, and his visions help him confront his fears and self-loathing. The story is quite an inventive idea and it’s carried off with reasonable success. Hallucinatory scenes, like dream-sequences, are notoriously difficult to make interesting, as we know they are not ‘true’, but here the author manages to invest greater plot value in the hallucinations by making them seem more like second sight than purely inventions of a drugged mind. Overall, it’s a passable short story.

Mike Bickerdike’s reviews and thoughts on science-fiction can be found at https://starfarersf.nicepage.io/