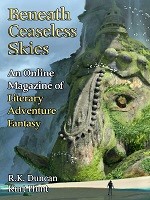 “Hassan the Executioner Walks Out of Jawasar for the Last Time” by R. K. Duncan

“To Crack the World” by Kurt Hunt

The 330th issue of Beneath Ceaseless Skies has two good short stories.

“Hassan the Executioner Walks Out of Jawasar for the Last Time” by R. K. Duncan

Hassan is Queen Lamia’s executioner in this short fantasy set in a different world. Enhanced by her magic, he is almost indestructible. But when traitors murder her, he has nothing left to do except leave the capital she had ruled.

Ahead of him, all the city people who hated her dictatorship wait, especially the old ruling families who abused him when he and Lamia were children. The closer he gets to the city walls, the more determined his attackers and the more Lamia’s magical protection fades away.

The story was well constructed and an entertaining read. The author slowly revealed Lamia’s impact on the city and left the reader grappling with whether or not she was a beneficial dictator.

“To Crack the World” by Kurt Hunt

In this short fantasy, Daum and a military escort bring back a mage so it can ‘crack the world’ in the next battle. The mage is a ball of flesh, incapable of self locomotion but extremely powerful in magic.

When local raiders try to kill the mage, Daum is thrown to the ground unconscious. Waking, he finds the mage gone, the raiders dead, and his escort looking to him to recapture the mage. And none of the soldiers will help him. After all, it’s his job to secure and deliver the mage. The ball of flesh could not have gone far, but regardless, he had no answer for the mage’s world-cracking power.

This pacy tale was a pleasure to read despite being a theme explored many times over the years.