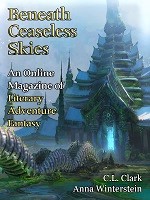 “The Captain and the Quartermaster” by C. L. Clark

“The Colors of Sand” by Anna Winterstein

The 326th issue of Beneath Ceaseless Skies has two captivating short stories.

“The Captain and the Quartermaster” by C. L. Clark

Lan is a commander in the People’s Army, and Jissee is the army’s quartermaster in this short SF tale set in a different world. The People’s Army has fought against a tyrant for four years with little success and much death.

Lan and Jissee are lovers and now married. The war has hardened the two women in ways they both despise in themselves. Will their love survive the endless hardships and death that surround them?

The story was an interesting exploration of relationships blossoming and maturing in the brutality of a seemingly hopeless war. The prose was well developed and easy to read.

“The Colors of Sand” by Anna Winterstein

In this SF short, Bas’hai sees a shimmer on the desert’s horizon. She is the advanced lookout sent to warn her people of any stealthy attack by the people from across the desert. At first, her concerns receive scant attention from the general.

The next day the authorities cannot wish away the enemy’s presence on the horizon, and Bas’hai’s people set up their traps. It has been a hundred years since the last invasion, and the new generation can only act on historical warnings. Still, they prepare to raze their enemies. But what if history is wrong about the enemy’s intent?

This character-centric story had a good pace and was a pleasure to read.