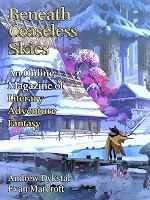 “Cleaning Up After the Blackout Boys” by Evan Marcroft

Two tales featuring strange mixtures of magic and technology, as well as characters forced into sudden violence, appear in this issue.

“Quintessence” by Andrew Dykstal takes place inside a mine within a tall mountain. During a night lasting three months, the extreme cold outside prevents the workers from leaving. The peculiar substance they mine causes many of them to suffer a fatal illness that crystallizes their bodies.

Desperate to find a cure for his brother-in-law, the protagonist sneaks into the room of the so-called witch who serves as a healer for the miners. Discovered in the act of stealing the substance needed to cure the dying man, he murders her. This is hardly the end of his troubles, however, as the dead woman’s mind inhabits his body. Forced to work together, they uncover an elaborate plot to sacrifice the miners for profit, and struggle to find a way to save them.

The fantasy aspects of this story are unique and imaginative. The valuable but dangerous substance found in the mine, for example, is created in a way that resembles the action of neutrinos.

The first part of the narrative is very dramatic. The main character’s panic and guilt are powerfully conveyed. The rest of the story, perhaps inevitably, comes as something of an anticlimax.

“Cleaning Up After the Blackout Boys” by Evan Marcroft is set in a realm wracked by an internal power struggle. The main character’s job is to remove all evidence of victims’ existence after they are killed by the authorities. The woman who supplies him with the free meals that allow him to survive and care for his child pressures him into accepting a dangerous assignment.

He must retrieve a treasure map from the home of a recently eliminated crime boss, even though his minions will be after it as well. She gives him a magical weapon that turns him into an unstoppable killer, and causes him to see his victims as monsters.

The magical technology in this imaginary world is biological, with modes of transportation formed from living creatures. This part of the story is interesting, but not relevant to the plot. The protagonist is peaceful by nature, so the way in which he is transformed into a relentless slayer is emotionally effective. What happens at the end of the story seems somewhat contrived.

Victoria Silverwolf has a phoebe’s nest in her car shelter.