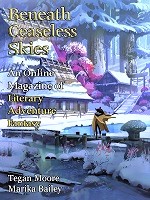 “Bast and Her Young” by Tegan Moore

The 321st issue of Beneath Ceaseless Skies has two absorbing stories, including one novelette.

“Bast and Her Young” by Tegan Moore

A young woman is coronated as Pharaoh in this historical fantasy novelette. Both Hapshepsut’s father and brother-husband have died, leaving just a sickly boy infant to ascend the throne. To protect the lineage, the priests declare her as Pharaoh. And now she waits for the spirit of her father-god to appear to counsel her.

Days turn into weeks, her father’s spirit doesn’t appear, just an unknown ba-bird follows her. It is an apparition that no one else can see. She tries to talk to the ghost, but it remains mute until she can call it by name. After some time, she finds a clue to its name from a painted image of a past Pharaoh with breasts.

Hapshepsut learns that the male descendants of this past female Pharaoh chiseled out her name from the monuments. And then another ba-bird appears. How much history is cut away, and how can Hapshepsut ensure her history is left intact?

This story’s plot was mysterious and appealing, and the chance to get a view of ancient Egyptian life fascinating.

A wolf eats Ikoro in this revealing short fantasy set in an ancient forest. The she-wolf absorbs Ikoro’s spirit, and they become Kuleika. And I becomes we. For a time, the two souls question the match. And then a new pack accepts them, and they discover they are pregnant.

As their pups grow, Kuleika finds she can change between human and wolf form, and then they learn that the pack’s old matriarch is just like them. Kuleika hears the story of their origins, of how new humans destroyed the old ways. And how they should avenge this destruction of the ancient indigenous ways.

This was an engaging yarn. The author carefully revealed the story instead of merely telling it.