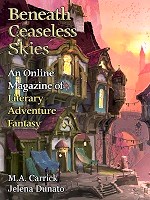 The 320th issue of Beneath Ceaseless Skies has two absorbing short stories.

A small girl, Arenza, begs on the streets of a faraway city in this short fantasy. Arenza recently lost her mother and is begging to get enough money to buy the right mourning tribute.

She may only be eight, but she is smart and catches the eye of Ondrakja, a woman who remembers circumstances forcing her onto these same streets at such an age. Arenza’s natural caution makes it hard for her to believe Ondrakja isn’t enticing her into a brothel. But Ondrakja has an entirely different plan for the little girl.

This story’s prose had a charm to it that made it a pleasurable read. However, the plot itself lacked originality.

Caterina has a problem in this charming short fantasy set in old Venice. She is in love with a poor boy, but her father needs her to marry an old, cold, and wealthy man who holds her father’s gambling debts.

On a gondola, Caterina finds a discarded black mask. It is a magical mask that can guide and help her. But her troubles are enormous and seemingly insurmountable. But when she puts on the silk mask, she becomes Colombina, a woman of wisdom and guile.

This was an engaging yarn. The author told the story through an unusual perspective with captivating and mysterious prose.