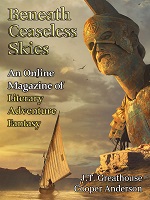 “The Gwyddien and the Raven Fiend” by J.T. Greathouse

“A Land of Blood and Snow” by Cooper Anderson

This issue of Beneath Ceaseless Skies brings with it two stories that are a blend of horror and fantasy. From a village in a fictional world to a small town in Eastern Europe, there’s much to enjoy in these two dark tales.

“The Gwyddien and the Raven Fiend” by J.T. Greathouse

Something is strange about the village of Nyth Fran, and Llewyn has been sent by his mistress, the Grey Lady, to hunt and kill the spirit that she believes to be haunting its people. When he arrives, he finds he’s not the only one after the entity—a dark sorceress has also come with the intent to bind it to her will. His life is now doubly in danger from both the spirit and his competition, and Llewyn has to find a way to kill his quarry without getting killed himself.

I thoroughly enjoyed Greathouse’s story. The blend of horror and fantasy makes for a very entertaining tale and I was engrossed from the beginning. One aspect I particularly appreciate is the originality, as Greathouse didn’t follow the usual fairy trope of sweet pixies and playful winged creatures born of the Victorian era. Instead, this hearkens back to a time when the fae were to be feared, when they were considered something far darker and far more dangerous than the creatures whose mythos was whitewashed for children in the 19th century. I very much recommend this one.

“A Land of Blood and Snow” by Cooper Anderson

The villagers of New Wallachia have lived in fear of their werewolf rulers for years, ever since King Ivar killed Vlad the Impaler. Ivar placed a bell in the center of the town and invited any who would challenge his rule to ring it, after which they would fight to the death. A few were foolish enough to try, but none succeeded. Now, a baker’s apprentice watches as the blacksmith, his wife murdered for sport by Ivar’s son six months prior, challenges the monsters himself.

Anderson caught my attention right from the start in this story. From the moment I read the words “New Wallachia,” he had me. I love Romanian history, and Anderson offers up an engaging alternative version here. It is a pleasant surprise to find that it isn’t about Vlad Dracula and vampirism as I had expected but instead focuses on lycanthropy. It’s an excellent story despite a few typos and, again, one I highly recommend it.