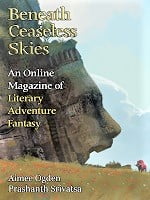 “Seven Dreams of a Valley” by Prashanth Srivatsa

The main character in “Buttercream and Broken Wings” by Aimee Ogden is a fairy, of the kind familiar from European folklore. After the old woman who fed her dies, she seeks another human patron. In exchange for magic spells, a young woman provides the fairy with food. The plot becomes a variation on the story of Cinderella, but with a much darker tone.

The author succeeds in taking elements from old fairy tales and making them seem new. With a fairy as the viewpoint character, the story offers a fresh look at the world, as seen by a supernatural being. An interesting aspect is the existence of wild fairies, surviving without the help of humans. One scene, featuring sexual activities among such creatures, seems out of place, and detracts from the story’s mood.

The setting for “Seven Dreams of a Valley” by Prashanth Srivatsa resembles a fantastic version of India, the author’s homeland. A woman, thought to be a sorceress, falls into the hands of her enemies. She is imprisoned, tortured, and faces execution. A guard who watches over her narrates the story. Each night, he has visions of another land, where he witnesses many events over several years. His dreams and the reality of the prison come together at the conclusion.

The narrator’s visions are colorful, detailed, and evocative. The way in which they relate to the woman’s imprisonment is overly simple, after such elaborate dreams. 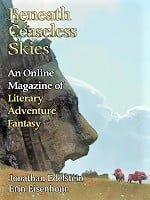 “It Is Not From Heaven” by Jonathan Edelstein

In “It Is Not From Heaven” by Jonathan Edelstein, a fisherman finds a talking fish. The animal warns of enemies approaching. The man takes it to the religious leaders of his community, who argue over the meaning of its words. Disagreement evolves into violence, and the fisherman worries over what to do about his miraculous discovery.

Although the setting is clearly a fantasy world, many aspects of story resemble traditional Judaism. The history of the fisherman’s people is similar to that related in the Old Testament. Imaginary names mix with familiar ones, such as Ezra and Joshua. The contrast is sometimes jarring.

“The Black-Eyed Goddess of Apple Trees and Farmers’ Wives” by Erin Eisenhour takes place in a land similar to ancient China. In an attempt to eradicate a deadly plague, religious leaders plan to cut out a young woman’s heart. A sympathetic soldier plots to help her escape, but she has her own plans.

The sacrificial victim narrates, and her irreverent, sarcastic comments enliven what might otherwise be an entirely depressing story. The presence of the solder allows the author to undermine the reader’s expectations in an effective way. A folktale related by the narrator at the beginning foreshadows the conclusion, lessening the surprise of the magical event that ends the story.

Victoria Silverwolf recently wrote an article about the classic film How to Stuff a Wild Bikini.