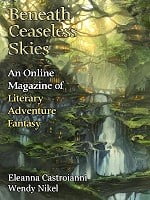 “Who Goes Against a Waste of Waters” by Eleanna Castroianni

Two stories featuring narrators who live in isolated communities appear in the latest issue of this biweekly publication.

The title of “Who Goes Against a Waste of Waters” by Eleanna Castroianni is the name of the main character, an indication of the strange, exotic mood of this tale. This person and a sibling live inside the skull of a giant, raising animals known as ghost-sheep in order to sell the milk. Their livelihood is threatened by coyotes, which attack the sheep, and ghosts, which attack people, and which only the sibling can see. The sibling goes to a place called the Deep Night to find out what became of their parents, but many mysteries remain unsolved.

As this synopsis may indicate, the main appeal of this story is its bizarre background and concepts. The plot raises more questions than it answers, which may frustrate some readers.

The setting for “Lonely Children Lost at Sea” by Wendy Nikel is an island inhabited solely by castaways. No children are ever born on the island. The population only increases when shipwrecks bring children to shore. The narrator is the island’s schoolteacher, tending to these new arrivals. A friend and her husband raise the latest lost child as their own, instead of allowing the islanders to care for her communally, as usual. The child acts strangely, eventually leading to tragedy.

The author relates this sad story in a realistic manner, appropriate to its minimal fantastic content. The themes of feeling out of place among strangers, and of yearning for a lost home, are certain to touch the reader’s emotions.