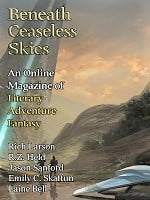 “The Sniper and I” by Rich Larson

“Only the Messenger” by Emily C. Skaftun

“Song of the Water Bear” by Laine Bell

“Where the World Ends Without Us” by Jason Sanford

A publication that normally arrives biweekly continues a month-long celebration of stories that combine science fiction with fantasy by offering new fiction each week. In this case, the tales lean much more to the SF side of the equation.

The narrator of “The Sniper and I” by Rich Larson arrives on a war-torn planet to serve as a spotter for a sniper of uncommon effectiveness. A direct connection between the sniper’s nervous system and weapons results in a deadly cybernetic organism. Both the sniper and the narrator turn out to be other than they seem.

This is a grim, realistic account of the way in which war renders combatants both more and less than human. The plot and setting are full of vivid speculative elements, which seize the reader’s imagination while never losing verisimilitude.

“Only the Messenger” by Emily C. Skaftun takes place aboard a starship crewed by many kinds of aliens. In this universe, reincarnation is a common, accepted fact. Anyone who dies is reborn, often into the body of a completely different being.

The narrator is an aquatic alien who has recently broken up with a lover. A cat-like being shows up from nowhere, somehow able to live in the vacuum of space, and enters the ship. The explanation for its existence involves a terrible secret about the starship’s instantaneous communication system. The discovery of this fact, combined with a threat to an entire solar system, requires a selfless sacrifice on the part of the narrator.

The author displays great creativity in the depiction of multiple bizarre lifeforms. At times the completely alien narrator sounds too much like an ordinary human being, ruining the story’s sense of strangeness. Although the plot is serious, there are moments that seem inappropriately comic. Even allowing for a touch of fantasy, the connection between the communication system and reincarnation is difficult to accept.

As in the previous story, the narrator of “Song of the Water Bear” by Laine Bell is a water-dwelling alien. It belongs to a species that estivates during dry spells, returning to life when moisture returns. Shape-shifting invaders disrupt the peaceful lives of these beings. The narrator comes up with a plan to make use of the animals that share the same aquatic environment in order to drive away the strangers.

The main appeal of this story is its description of an exotic ecosystem, although this also makes it hard to empathize with the characters. (It is possible that the invaders are supposed to be human space explorers in shape-changing environmental suits, but this is not at all clear.)

“Truth as a Prize” by R.Z. Held is this issue’s only true fantasy story. The narrator is a ghost, trapped in the afterlife as one of many deceased servants of a sentient, malevolent Game. Those who attempt to obtain their greatest desires by beating the Game must choose one ghost as a friend, and one as an enemy. The narrator implies that all who face the Game lose, becoming enslaved ghosts.

A woman who can use her own blood to cast magic spells challenges the Game, choosing the narrator as her friend and the ghost of her own granddaughter as the enemy she must defeat, even though her desired prize is to return her to life. The battle leads the narrator to the possibility of escape.

The premise is an interesting one, and the importance of truth and lies to the outcome of the Game raises intriguing philosophical questions. At times, the logic of the Game and the way in which magic works in this setting is confusing.

“Where the World Ends Without Us” by Jason Sanford begins long after nanotechnology, created to protect the ecosystem, becomes the ruler of humanity. People exist either as nomads, punished by the machines if they damage the environment, or as caretakers for the nanotechnology, their bodies enhanced by the microscopic devices.

The main character was once a nomad, but the machines forced her to become a caretaker. They intend to punish her with death for a crime committed by the previous caretaker, requiring her to journey to a domed preserve to await execution. Other caretakers, to their surprise, are also sentenced to death. With the help of nomads living within the dome, and rogue nanotechnology simulating the consciousness of a dead caretaker, they seek a way to escape their doom.

This relatively lengthy story contains much more than this brief synopsis suggests. The author is generous with speculative themes, perhaps too much so. This tale is a sequel to others set against the same background, and readers familiar with these previous works are more likely to appreciate it.

Victoria Silverwolf had to have a new splashguard installed in her car, but at least got to read a book while waiting.