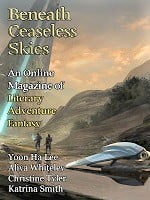 “My Sister’s Wings Are Red” by Christine Tyler

“The Spoils” by Aliya Whitely

“The Glassblower of Galilei” by Katrina Smith

All this month, Beneath Ceaseless Skies offers readers new stories weekly, rather than the usual biweekly. These tales combine science fiction with fantasy in imaginative ways.

“The Mermaid Astronaut” by Yoon Ha Lee demonstrates this mixture of elements most clearly. The story reminds me of Hans Christian Andersen’s famous fairy tale “The Little Mermaid,” in that the title character is willing to give up her home in the sea in order to walk on two legs. In this case, however, the object of her desire is not a mortal man, but the entire universe.

A starship with a crew consisting of many different kinds of aliens arrives on the mermaid’s planet. She makes a bargain with a sea witch, in order to join them on their vessel. The witch says that she will expect payment when the mermaid returns to her own world. The mermaid joyfully explores the cosmos, but comes back to her home when she learns that the time dilation effect of starflight keeps her young while her beloved sister grows old. A final encounter with the sea witch reveals the price she must pay for her odyssey among the stars.

This is a gently poetic story, written in a way that perfectly balances magic with technology. The author conveys both the wonders of the undersea realm and the majesty of the galaxies in vivid detail. The style is simple enough for younger readers, yet sophisticated enough for their elders.

“My Sister’s Wings Are Red” by Christine Tyler takes place on Earth after insect-like aliens transformed the inhabitants into beings similar to themselves. Human beings now go through multiple stages of metamorphosis, eventually becoming winged adults. Males are all drones, existing only to attempt to mate with the Queen. Females have different functions, depending on the color of their wings.

The narrator has gray wings, dooming her to a life of drudgery. Her sister, still within a translucent pupa that reveals developing red wings, is destined to be the next Queen. The narrator envies her, until she learns the truth about the seemingly luxurious life of the Queen, and makes a desperate effort to save her sister from such a fate.

The juxtaposition between the human and insect aspects of the characters is jarring, and not always convincing. Persons who are old enough to remember their lives before the aliens arrived accept the bizarre changes in their bodies more easily than one can believe.

The narrator works as a kitchen helper to a gourmet chef, and the author displays a fine talent for describing mouthwatering food. Ironically, only the Queen and her court can eat these treats, while those of lower station subsist entirely on nectar. The reader may feel a similar sense of frustration with a story that is beautifully written, but difficult to swallow.

In “The Spoils” by Aliya Whitely, people live their entire lives underground. Occasionally, they come across the body of a large creature. Carved in a ritual fashion, the carcass, now in several small parts, winds up in the possession of members of the community.

The story follows several of these people, and shows how the body parts change their lives. In particular, a woman, who accepts the tedious chore of watching the body as a butcher slowly cuts it up, emerges from underground to the outside world, learns about the people who live there, and finds out why they fear the giant creatures.

The episodic nature of the plot lessens the power of the final segment, which is the heart of the story. At times, the meaning of the characters’ encounters with the various body parts is opaque.

“The Glassblower of Galilei” by Katrina Smith takes place on an alien world, after humans defeated and destroyed the winged inhabitants. The title character creates living servants that emerge from large glass eggs. He makes a bargain with a mysterious woman, resulting in several eggs with secret contents. Only at the end of the story does the reader discover the purpose of these creations, and the glassblower’s reason for making them.

The author paints an intriguing picture of an exotic setting, and displays a rich imagination. The glassblower’s actions are difficult to believe, given his backstory, and the bargain he makes is a foolish one.

Victoria Silverwolf found a small typographical error in one of these stories, but it is not worth mentioning.