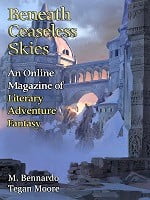 “The Ordeal” by M. Bennardo

A pair of historical tales with slight touches of fantasy appear in the latest issue of this biweekly publication.

“The Ordeal” by M. Bennardo is set in the early twentieth century. An American lawyer travels to a tiny European nation. He is appalled to discover that their justice system uses trial by ordeal to decide guilt or innocence. In particular, when a woodsman is accused of poaching, his wife must perform a nearly impossible task, or the man will be executed. Events cause the lawyer to undergo his own ordeal in defense of the woman, leading to an ambiguous ending.

Although the conclusion appears to include extraordinary events, it is likely that these take place in the mind of the protagonist. Aside from that, the only fantastic content of this story is the fact that it takes place in an imaginary duchy. The author considers interesting and important themes of faith and justice, but a confusing resolution weakens the impact of an intriguing premise.

The title character of “John Simnel’s First Goshawk” by Tegan Moore is a real figure from history, a pretender to the throne of England in the late Fifteenth Century. Because he was only a child when adults tried to seize the throne on his behalf, he was pardoned by the king. This story shows him as an adult, working as a falconer.

This brief tale has very little plot, consisting almost entirely of John Simnel considering the bird he is training, and comparing its situation to his own. The only trace of fantasy is the fact that the bird talks to him, and even this may simply be his imagination. Readers of historical fiction will better appreciate this character study than most readers of fantasy. Those who are not experts in English history will need to do some research to fully appreciate the story.

Victoria Silverwolf is not an expert in English history.