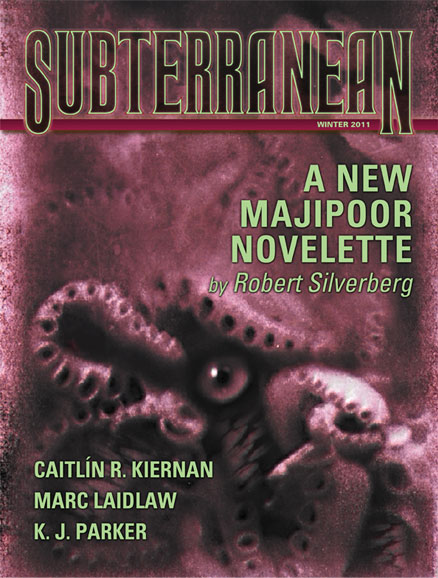 “The Boy Who Followed Lovecraft” by Marc Laidlaw
“A Long Walk Home” by Jay Lake
“A Small Price to Pay for Birdsong” by K. J. Parker
“The Artists” by Larry Niven
“The Melusine (1898)” by Caitlín R. Kiernan
“The Tomb of the Pontifex Dvorn” by Robert Silverberg

In “The Boy Who Followed Lovecraft” Marc Laidlaw puts the reader inside the head of an adolescent boy called Douglas who finds escape in the stories of H.P. Lovecraft. Douglas lives with his aunts after his parents died when madness took them. I would have really liked to know how is parents died and what their madness involved, but unfortunately this isn’t explored by Laidlaw which is a shame as I think it could have added to the story, especially as early on we are told that he was “left to investigate [it] on his own.”

Douglas finds out that his hero lives in the same town as he: Providence, Rhode Island. So he sets about trying to catch a glimpse of him. He feels an empathy with Lovecraft because he seems to understand the madness that has affected his own life.

The story did a good job of providing an insight into why a teenage boy might find Weird Tales and Lovecraft’s tales in particular an escape, especially given his family situation. I also found the details about Lovecraft’s daily life that the boy discovers quite interesting, and I was engaged until the end in speculation as to what the resolution would be when the boy eventually met his hero.

However, I’m not sure that I quite believed the ending – I felt it was a bit of a trick of a twist, and one that didn’t fit well with the rest of the story.

“A Long Walk Home” by Jake Lake is a science fiction story set in the far future when man has colonised space and, it would seem, to have been able to grant some of its members immortality. Aeschylus Sforza (I loved the name) is a “Howard”, which means that he has undergone procedures that appear to the reader to have made him immortal. We are never explicitly told this so that is why I am being a bit vague, but this can be implied by what follows. Ask, as he is known, has become a sort of amateur explorer around the range of human-inhabited space with a fascination for the different natural phenomena discovered. One day he’s exploring in some caverns beneath the surface of the planet Redghost when there is an earth tremor. The circuits in his head (inserted as part the Howard procedure) tell him that the shudder might have been something like a solar flare or a nuke. He worries that his equipment and transportation on the surface might be knocked out, in which case it would be a “long walk home.”

That fear turns out to be ironic. Ask emerges to find a world pretty much the same as he left it, but without any of the inhabitants left. The area in which he had been exploring had been quite sparsely populated, but he soon finds farms without any people. Livestock and pets are still there, but no humans. And there are no corpses either. Ask sets out to try to find what has happened to the planet, and to see if he can ever get home at all.

“A Long Walk Home” featured some great observations about what happens to a world when the people go and also offered an insight into what immortality might be like.

K. J. Parker’s story “A Small Price to Pay for Birdsong” was probably the one I enjoyed most out of a strong selection in this issue of Subterranean. The story is well constructed and the dialogue between the two main characters quickly drew me in and kept me entertained throughout. The story is set in what I am guessing is a baroque alternate world not too dissimilar from the worlds found in Parker’s novels. That said, apart from the names of places and people being different, I felt that this story could have been set in 18th Century Europe. Does an historical Earth like setting with different names for countries and local variations on politics qualify as speculative fiction? I am not sure, but for me it didn’t detract from an excellent story.

The story revolves around composers. The protagonist is a musician with a senior place in his country’s music academy, but with very little talent. His symphonies are good enough, but lack spark. His protégé student tries very little and his music is genius. There’s just one problem though, the student has murdered someone and is awaiting execution when the older composer visits him in prison.

The story is a classic moral dilemma. Will the untalented composer do something unethical but achieve the fame he desires? The story builds nicely as we are shown how the implications of his decision play out.

There are also some interesting reflections about the rigours of the artistic life as well, many of which I am sure apply to writers as well as composers. Well worth a read, and I would recommend Parker’s novels too if you enjoy “A Small Price to Pay for Birdsong.”

Larry Niven manages to pack a wealth of ideas into the shortest story of this issue of Subterranean. In “Artists” the reader is challenged to consider the nature of sentience itself. During an interstellar alien art exhibition at the Draco Tavern, the owner encounters a sea creature that might be an alien, animal or maybe just art. Niven’s piece is a great example of how a story can be economical with words but still excel in creating a believable science fiction world and making the reader think.

Caitlín R. Kiernan’s “The Melusine (1898)” has all the trappings of a steampunk tale with Zeppelins, and the exotica of a travelling circus of “Transportable Marvels” arriving in a prairie town in North America one summer’s day. Despite that, I really liked this story and I think it actually used its “trendy” fictional setting very well. The main character of the story is a lady called Cala who doesn’t believe in marvels. She thinks the exotica of the travelling show are all fakes, mechanical devices and frauds. Until that is she encounters a Melusine in one the show’s tents. A Melusine is a legendary creature that is effectively a sort of freshwater mermaid.

Like Cala I too was caught up in the mystery of the Melusine, and suspended my disbelief.

“The Tomb of the Pontifex Dvorn” by Robert Silverberg is a new novella set on the planet Majipoor. I am new to the Majipoor series, having not read Lord Valentine’s Castle, so I can’t comment on how well the novella fits in with the rest of the fiction from that setting. However, I didn’t feel that I had to have read anything else from the Majipoor series in order to grasp the background to the story or to enjoy it. So don’t be put off if you are in the same position as me, I think the story will work for you too.

Simmilgord is the hero of the story, but at the beginning he only yearns to be a hero, to have power in the world and to make an impact. He becomes a moderately well-known academic and it seems that his hopes of fame are illusory. His specialist subject is the Pontifex Dvorn, the great leader of legend who established the planet of Majipoor as it is now, but only a few other dusty academics are really interested in the arcane knowledge that he possesses. That is until city of Kesmakuran approaches Simmilgord’s University looking for a curator of the alleged burial ground of the Pontifex. Simmilgord jumps at the chance.

It seems though that the mayor of the city is only interested in making the city into a tourist attraction rather than genuine historical research. Simmilgord and the academic colleague who accompanies him must decide between their academic principles and the demands of society and personal fame.

I am sure the story would have been richer for me if I had known more about the background, but having said that I still found it a good read and the ending was quietly satisfying. Silverberg is, of course, an accomplished writer, and he has no problem keeping the reader involved in what is ultimately not the most challenging of stories.

There are some well known authors in this issue of Subterranean and on the whole the stories, even the weaker ones, are well worth reading, plus they’re free to read online.