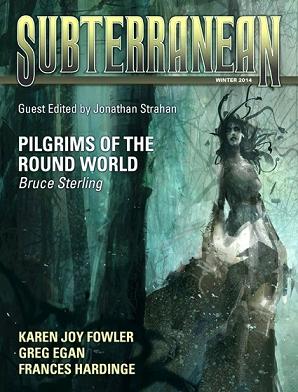 Subterreanean Online has consistently published some of the best SF of the year, and I looked forward to seeing their Winter issue.

The issue starts out with “The Scrivener,” an allegory about the writing process. The title character has three daughters: Imagination, Ornamentation, and Plot, who don’t follow in their father’s footsteps. The Scivener is told by a critic to send his daughters out to a witch in the forest, where they might learn how to be writers. Each runs into something unexpected. Eleanor Arnason may be writing an allegorical tale, but it avoids heavy-handedness and manages to make the symbolic characters real and it works just as well as a straight story.

I find Greg Egan‘s “Bit Players” to be a total misfire, though. The concept – revealed far too slowly as Segreda, the protagonist, figures it out – is that the people in it are background characters in video games. The concept certainly has possibilities, but once revealed, it really doesn’t do much about it. The concept is too slight, and the story didn’t do much for me.

“The Prelate’s Commission” entails Teleui, a very talented artist, making a very special painting: one of the Devil – his true appearance, so that the world will know him. Teleui takes on the commission and tracks down the Prince, who, of course, has conditions. Jeffrey Ford isn’t doing the standard “deal with the devil” story, though, and though it’s a twist ending that ends in death, it avoids the cliches you might expect.

We move more toward horror in “Nanny Anne and the Christmas Story” by Karen Joy Fowler. Nanny Anne takes care of twins Fiona and Dacey when their parents are away and when a mysterious storm surrounds their house while their parents are away over Christmas, Fiona begins to suspect that Nanny Anne is doing something frightening that has to do with some odd circumstances about the origin of the two children. The scariness of the situation is ramped up slowly and the result is some nice terror about the loss of what no child wants to lose.

“Hayfever” is my favorite of the stories in this issue. It’s about Stephen, who is given the job of cooking a final meal for Pyne of Mabar, an alien tyrant sentenced to death. Pyne requests the meat of a mimblebat, a creature of a place called Painted Plains, one of the first planets to rebel against him. Of course, Stephen suspects a trick, and getting the ingredients turns out to be even more difficult than he had expected, even knowing this could be some sort of trick. Frances Hardinge‘s story is one of amazing imagination, and which weaves supposedly diverse elements into something that comes together flawlessly. It really has everything that good science fiction should have, wrapped up in a nice sense of fun.

“Caligo Lane” is a street in San Francisco, where Franny lives. Franny is a cartographer, but her maps are more than just directions: they are a way to make distances disappear. Set in the 1940s, Franny finds herself casting a spell to effect a rescue. Ellen Klages writes a good tale about rescue which certainly has a feel-good vibe. It’s a type of story that bothers me, though, since it uses magic to deal with a real-world horror that is just too big for a magic solution. That’s my own quibble, and if that sort of thing is not an issue, then you’ll like the story much more.

K J Parker contributes “I Met a Man Who Wasn’t There,” a fantasy where the narrator approaches a magician in order to learn magic. Magic and magicians are banned (even though magic does not work), but the man gives the lessons, which is not what is expected. That’s one big strength of the story: one constant surprise after another as we learn more of the character and how his request plays out over time. I liked the cleverness of the story, and the lessons it teaches without teaching.

“Pilgrims of the Round World” by Bruce Sterling completes the issue. It’s a novella set in Renaissance Turin where Ugo and Agnes, proprietors of the Inn of Saint Cleopha are called to be ambassadors to the court of Cyprus, ruled in part by their daughter, the Queen of Jerusalem. The story is filled with stories and characters, all woven together into a tapestry of talk. There are plenty of wonders here, but the story is far too long and spends all of its time in talk.

Overall, this is another first-class issue from Subterranean Online. Even with the stories I don’t care for, the results are better than most anything else around.