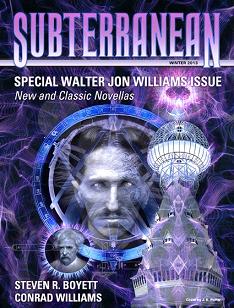 The Winter issue of Subterranean Online bills itself as a “Special Walter Jon Williams Issue,” with two novellas by Williams, including his classic “Surfacing.”

“Raptors” by Conrad Williams is the story of Eddie’s relationship with Dervla, a mysterious woman who seemed to be keeping secrets. Eddie is dealing with his dying grandmother and with the on-off relationship with Dervla. Most of the story reads like a mainstream relationship story; the fantastic element only begins to come into play toward the end, where you begin to understand what Dervla was doing throughout the story. I found it a little slow going, but overall worth the time to get to the conclusion.

Steven R. Boyett contributes “Hard Silver,” set in the cowboy era, where a mysterious masked man and his faithful Indian companion discover a dying man, who had been brutally attacked after a short visit to Agville. There are dangerous supernatural forces at work, and it’s a good thing that the masked man happens to use silver bullets in his gun. It’s a wonderful conceit and a fast-paced modern pulp story — with far more depth than traditional pulp, of course — and an ending that leaves things hanging in a way that is very satisfying.

The featured Walter Jon Williams story is an alternate history novella focusing on Mark Twain at the turn of the 20th century. “The Boolean Gate” has his path crossing with Nikola Tesla, who is working on a plan to give unlimited power for all the earth. But Twain eventually discovers that there are dark forces at work. The underlying story here is a strong one, but I found Williams spends far too much time on minutiae of the era (four paragraphs, plus a poem, about J. P. Morgan’s big nose) and also too much time establishing the character. There’s a five thousand word scene of a breakfast between Twain and Tesla that establishes a few small items that are important to the story, while giving numerous descriptions of the tables, silverware, tablecloths, and meals at the Waldorf hotel. The story would have been much better at 2/3rds the length.