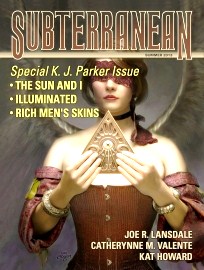 “The Sun And I” by K. J. Parker
“Stage Blood” by Kat Howard
“Illuminated” by K. J. Parker
“The Case of the Stalking Shadow” by Joe R. Lansdale
“The Shoot-Out at Burnt Corn Ranch Over the Bride of the World” by Catherynne M. Valente
“Don’t Ask” by Bruce McAllister and W. S. Adams

This is a special K. J. Parker issue of Subterranean Online.

Five down-on-their-luck young men decide to “invent God” and present themselves as His holy messengers as a way to legitimize their begging. Figuring the scam to be a short-term affair, they are surprised when their fake religion takes off. A few unintentional miracles such as healing a horde of plague sufferers with a questionable potion (soup made, in part, with moldy bread) launches the The Invincible Sun into the stratosphere, and the religion’s founders into the limelight. Exponential growth follows with all that comes with it. This story is a processional where each thing naturally flows to the next–all the way to the end.

This is a story about magic–both the kind that magicians do on stage, and the kind that exists in fantasy and supernatural tales. It begins onstage with a magician, Ian, thrusting swords through a woman in a clear box. Like any good sleight of hand, what the magician, and the woman, experience is different from what the audience sees. After the final curtain, Ian locks the box away with the rest of his secrets. When Stella appears one day from that secret place, Ian wants her–not for romance, but for her secrets. The magic here has secrets of its own. The ending is fitting, but unsurprising–like a magic trick seen again after the viewer has figured out how it works.

The protagonist here is a chauvinist male magician in a time when women, with their “frailties,” are considered unfit to become full magicians. Though it is made clear that his views on women are typical of the time and place, it nonetheless creates a character that is not immediately, or consistently, sympathetic. Having drawn the short straw, and been stuck with a female assistant, he goes to an ancient tower in search of arcane knowledge. Though they find the tome for which they were searching, he can’t read the writing and, because unknown magics are best not read aloud lest they be cast, his assistant can’t read it to him. Therefore, she must transcribe the book in her more legible hand for him to read. As the tale progresses, it becomes harder all around to determine who is telling it. This is a classic Parker story.

“The Case of the Stalking Shadow” by Joe R. Lansdale

Supernormal investigator Dana Roberts recounts her first adventure to a club of skeptics after a club member contacts her to confess to having secretly recorded Dana’s earlier visit. This is a gestalt where the setting and characters work together as more than background. Dana’s experience, which began when she was a girl and spanned the years into her adulthood, is expertly told and captures reactions one might expect of someone in that situation. As stories about narrators who are relating tales told to them by other characters go, this one is not bad.

“The Shoot-Out at Burnt Corn Ranch Over the Bride of the World” by Catherynne M. Valente

Here we start with a fantastic title and experience a tale worthy of it. The Bride narrates this story where the Wizard of Los Angeles and the Wizard of New York battle it out to determine which of them will be the Bride’s Groom. The wizards’ duel, however, comes after we learn about some of the competitors who did not make it to the final round–the Witch of the Mississippi, the Baron of Nebraska, and the Hag of Florida to name a few. It is difficult to classify this story, and that is part of its charm. It is as if the author placed a surreal alternate universe over a typical western duel. Things here are familiar, yet different. In the end, the Groom gets the Bride. It is the how of it that makes this a fun read.

After a man’s soldier sweetheart is killed by stepping on an IED, he searches for answers–not to just how she died, but also to what love is. That he loved her is never in doubt. The way that he shows it begs the question of what any of us do, or would do, for the ones we love. This is a short and thought-inspiring piece.