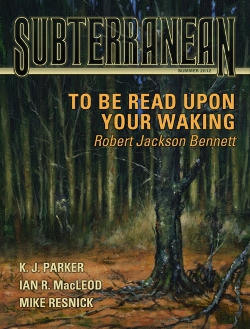 “Let Maps to Others” by K.J. Parker
“Tumbling Nancy” by Ian R. MacLeod
“To Be Read Upon Your Waking” by Robert Jackson Bennett
“The Puce Whale: A Lucifer Jones Story” by Mike Resnick

This is an excellent issue of Subterranean, a joy to read. And since much of it was horror I found it exhilarating. The fantasy and horror are of superior quality.  Just don’t expect any science fiction this time around.

First off is “Let Maps to Others,” written by the enigmatic K.J. Bishop. “Let Maps to Others” concerns Bishop’s long running Company series that takes place in an alternate world (or perhaps a ruritania) in or around the Renaissance of the world. You do not have to be familiar with any of the previous stories to enjoy this one. It concerns an un-named scholar whose major field of study is the mythical lands of Escuvio. It seems that people in the not so distant past have visited this land but never divulged its location. Thus it has become the holy grail of a sort to the Company. If this does not sound exciting then I am not doing the story justice. K.J. Bishop writes with a startling clarity and suppleness of prose that reminds me of Ursula K. LeGuin. The story itself is written in a wonderfully quirky first person voice and concerns the unnamed protagonist’s rivalry with another scholar about Escuvio. There are rivalries and underhanded doings and ship rides and … Well, I can’t say more as I don’t want to ruin any surprises. But I have to say that I could lay out all those surprises to you right now and it wouldn’tt spoil the reading of this densely packed novella. My only quibble? It is not truly fantasy and not SF but as stated it is a ruritania, which reads as more of an historical tract than either of these genres. I guess I like a bit more fantasy in my fantasy, but as an example of its kind it is superb.

Ian R. MacLeod gives us a chilling horror story in “Tumbling Nancy.” This novelette begins prosaically enough with a publishing house in 1960s London. “Tumbling Nancy” is a series of children’s books written by Edna Bramley, and while everyone seems to have encountered them in their childhood, they are abominably written and the publishing house has decided to discontinue them. It falls to the new assistant editor, who is the narrator of the story, to tell Edna that her publisher is dropping her. Again, MacLeod writes as only he does and if you like his highly polished prose you will enjoy this story. What befalls the editor through the 1960s and up to today is a horror story about many things, cynicism and how it destroys, power and how it corrupts, and what may actually be behind this odd series of children’s books.

Robert Jackson Bennett has fashioned a superior work with “To Be Read Upon Your Waking,” set with a high dark fantasy backdrop. Compellingly written and emotionally moving, this chewy and detailed piece is just plain one of the best things I’ve read in High Fantasy in a long time. It takes place in our immediate past (1949-1950) and consists of letters written by a man (and cad) named James from France to his lover, whom he abandoned in London three months earlier. James has run off to France to avoid his debt collectors and bought a small property there that he believes to be the Anperde abbey; an abbey that he had been researching while in London. The epistolary form works beautifully for this story as we learn of the recent love affair between these two men and more importantly the consequences of James’ clearing out of the foundation of the abbey. He encounters more than he bargained for and slowly devolves into madness and/or the realm of fairy. If you like fine writing and enjoy dark fantasy do not miss this one.

The issue concludes in a more humorous vein in the further adventures of Mike Resnick’s Lucifer Jones. This episode, called “The Puce Whale: A Lucifer Jones Story,” is more complete than the last one I read and as the title suggests riffs amusingly on Moby Dick. After the rest of this issue I needed some humor and this one had me chortling aloud and even groaning at some of the puns. Of course, as the title suggests, it involves the search for the great puce whale (since the search for the great white whale was already taken) and is told by Lucifer in his customary small time grafter grandiose way. It is entertaining. Humor is hard to pull off but this one worked just fine.

This was an excellent issue of Subterranean with what should be some future award nominees (if not winners) for the major fantasy and horror awards. If you like those genres you will not be disappointed. But even if you just like well-written literary fiction of any kind you won’t be disappointed.