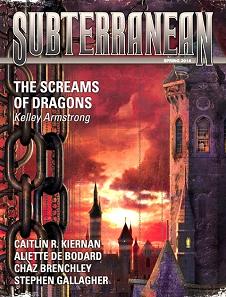 “The Screams of Dragons” by Kelley Armstrong

“Bus Fare” by Caitlín R. Kiernan
“The Traveller and the Book” by Ian R MacLeod
“Hath No Fury” by Kat Howard
“One Dove” by Stephen Gallagher
“The Burial Of Sir John Mawe At Cassini” by Chaz Brenchley
“The Days of the War, as Red as Blood, as Dark as Bile” by Aliette de Bodard

“The Screams of Dragons” by Kelley Armstrong takes that little voice inside of all of us, the one that says, “You can get away with it, no one will know,” and turns it into the screams of dragons inside a young boy’s head. Abused by his grandmother due to her superstitious prejudices against him, he retreats from his family. He cuts the connection away slice by slice, bruise by bruise, constantly working to find any edge against his tormentors, until he finds a path to vengeance.

The story’s a bit gruesome, but in a bucolic way, you know? No? That’s okay. Suffice it to say, there’s fields of green and beautiful castles, up to a point. Then there’s a town stuffed with gargoyles and odd people who probably aren’t as crazy as the rest of the world thinks they are. In the end, there’s a boy who I came to understand and sympathize with, but who had lost something human. Maybe he never was.

“Bus Fare” by Caitlín R. Kiernan follows the well-trodden path of a talkative, very patient, and trusting monster battling a human in a riddle death-match. Mythical monsters apparently don’t read these stories, and don’t know they’re bound to lose? The riddles are the frustrating kind with multiple answers if you allow some creativity. Bonus answers to one might be a painting, a television, a lego set, and a number of other things. However, the story’s not completely about the riddles, which really helps, so the ending feels better than the setup, and the writing is fairly entertaining throughout.

“The Traveller and the Book” by Ian R MacLeod carries multiple layers of analogy, and I think it will appeal to readers depending on their particular background. Both fans and opponents of omnipotent deities could find something to like or hate here. The story reads like a religious text centering on a character with god-like abilities, but it doesn’t delve far past the surface of this traveller. What I did know of him didn’t make me want to like him.

His attitude of ownership toward other people, especially toward women, struck me as either childish or jaded. He eventually creates a wife for himself, and in attempting to be altruistic, he gives her free will, not realizing the issue that she didn’t ever choose to marry him. The only other woman mentioned specifically is a flying harpy he copulates with momentarily. No comment.

“Hath No Fury” by Kat Howard in a nice rebuttal to the previous stories, taking a vengeful approach to girl power. One of the Greek Furies of legend must attempt to unravel a magical mystery in modern-day New York City. Her days are filled with run-ins with characters from various antiquated pantheons, like Odin and Baba Yaga, and has a similar feel to Neil Gaiman’s American Gods. The early story kept getting cut up by flashbacks, though, and I found it hard to gain traction with two stories intertwining so frequently.

As the story moves along, the flashbacks cease, allowing the modern plot to heat up for a strong push to the end. Our Fury has to deal with the psychological burden of existing to deliver only vengeance, and never arriving in time to save anyone. She also has a powerful need to safeguard her friendships, but the scales in her heart drive her to do the right thing, even when it will cause pain and possibly undermine those friendships.

I’m not quite sure why the editor included “One Dove” by Stephen Gallagher unless it was because of the steampunkish overtones so in vogue these days. I kept looking for some horror, fantasy, or science fiction element as I read, but it turned out to be a fairly entertaining Sherlockian mystery set in Victorian London, complete with steam trains and old-fashioned investigative techniques like hiring a street urchin to spook a horse. I had hoped for something more Lovecraftian because of the asylum and the spooky intro, but I didn’t get it. However, if you want an old-school mystery, I can recommend it.

“The Burial Of Sir John Mawe At Cassini” by Chaz Brenchley takes us back to the pulp science fiction days of yore, treating Mars and Venus as human-friendly environments without reference to any sort of technology to make it so. Humans have reached some sort of pact with aliens who now shuttle them around the inner planets on their ships. Generations ago, these aliens helped the British Empire populate Mars. The Russians have claimed Venus, despite the horrific heat, pressure, and lack of oxygen. I think the Russians got the short end of that deal.

The story focuses on an Anglican gravedigger observing a funeral procession that isn’t what it seems, while explaining the Martian-human culture and the political struggles between the human settlers and the native Martians. The human motives seem clear, but the alien motives are not. They also probably don’t realize how duplicitous humans are, which ends up being the crux of the story. The gravedigger seems like a stand-up fellow, though the people around him aren’t.

“The Days of the War, as Red as Blood, as Dark as Bile” by Aliette de Bodard follows a child living in the decline of a great interstellar empire as rebel forces advance closer to her home planet and the weaker imperial troops begin their retreat. She learns up close the brutality of war, the smash of stampeding crowds, and the pain of losing the people close to her. Although I felt some connection to the characters around her, I didn’t feel the main character’s plight, or identify with her much. She is faced with a stark choice at the end, but I felt she made it without understanding the full consequences, which drowned the impact for me.

A thoughtful piece, with interesting Chinese cultural references throughout.