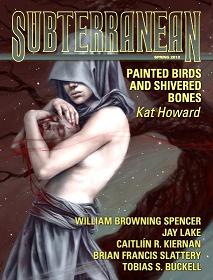 “The Seafarer” by Tobias S. Buckell
“Painted Birds and Shivered Bones” by Kat Howard
“A Stranger Comes to Kalimpura” by Jay Lake
“The Indelible Dark” by William Browning Spencer
“The Prayer of Ninety Cats” by Caitlin R. Kiernan
“The Syndrome” by Brian Francis Slattery

This is a full fantasy issue of Subterranean Online. And a good issue it is.

My least favorite story (and first read) of the bunch is “The Seafarer” by Tobias S. Buckell.  It’s not particularly bad, just bland. It’s an ordinary episode from a series begun with two novellas previously published in Subterranean. It concerns Alej, who has escaped the armies of an enchantress with a handful of men. He is weary of fighting and has arrived at the port city of Rusajka. It chronicles his search for work in Rusajka, but since his soldiering days are behind him he has trouble finding anything he can do. At his lowest point he is accepted on a boat owned by Yalisa. The rest of the story is about the ship and crew dealing with unscrupulous port masters (and magic) until a solution is found – or forced into place. I felt it to be rather predictable, and too long.  But as an adventure story it’s enjoyable enough.

“Painted Birds and Shivered Bones” is a superior work by Kat Howard, and is surely one of the best novellas to be published this year. The first paragraph provides a taste of the prose style:

“The white bird flew through the clarion of the cathedral bells, winging its way through the rich music of their tolling to perch in the shelter of the church’s walls. The chiming continued, marking time into measured, holy hours.”

That not only caught my attention, but told me I was in for a treat if the author could maintain the same level of prose. It not only continued but gathered layers, adding real flesh and blood characters, humor, and a satisfying love story.

“Painted Birds and Shivered Bones” is the story of Sweeney, a man cursed many years ago to live part of his life as a man and at other times be transformed into a bird. Taking place in modern day New York City, he meets up with an antisocial female painter of good renown (she suffers from a panic disorder). Together they piece together their various lives into something beautiful and tragic as she begins to paint various mythical birds, and Sweeney himself. Closure is very real for both but in unexpected ways. I can’t praise this work highly enough. Read it and luxuriate in the telling.

Jay Lake’s “A Stranger Comes to Kalimpura” takes place in the fantasy world he first created for his novel Green. It concerns the priestess of the Temple of the Silver Lady, Mother Vajpai. She encounters a god-like creature who has come to her city and immediately begins to destroy it. The plot revolves around getting rid of this godling. The idea is good and the characters interesting, with lucid, clear prose, but this story takes place in the middle of the series and contains far too much backstory for someone not familiar with it. I often found myself bored, as relationships were explained rather than lived, and past information statically recounted. I think this is wholly for followers of the series, who no doubt will enjoy it.

William Browning Spencer is a writer who writes stories that only he could. He is a one of a kind storyteller. “The Indelible Dark” does not disappoint. It concerns the existential life of Joel Sterns, a writer of genre fiction from Austin, TX. It is also the SF story he is writing at the moment. The fictional author breaks into his fictional story to comment and discuss his life. This delicate conflation creates a palpably grim atmosphere that never descends into the maudlin. It’s meta-fiction squared, off-beat and well-written, and makes for an exciting combination.

Another offbeat story is Caitlin R. Kiernan’s “The Prayer of Ninety Cats,” a dark fantasy written from an interesting angle. Written in the second person, you are a movie critic sent to review an old but restored copy of a black and white film concerning the Blood Countess in Romania who tortured girls in the basement of her castle. The atmosphere – of both worlds, an odd sort of out of place version of today, as well as that of the movie itself – is masterfully rendered. As a film lover I was entranced by Ms. Kiernan’s descriptions. Prose that flows like poetry and true horror is an excellent coupling. This is superior fiction.

Last up is “The Syndrome” by Brian Francis Slattery. Told in a lighter vein than others here, it nevertheless actually touches on some very timely topics. It takes place in a future where most of the world is destroyed by the undead. Yes, a clichéd scenario, but beautifully made new by the narrator, a human psychologist who specializes in analyzing the undead who come seeking his help. This is very uncommon, as the undead live in a perpetual now that does not lend itself to childhood traumas or any kind of traditional human syndrome. The psychologist works with one patient named Derek who appears to be trying to commit suicide even though he is already dead. We follow the interaction of these two characters as Derek takes up painting and tries to find why he is doing this. The discussions are surprisingly deep for such a comical idea and come from a truly alien perspective. Long but constantly surprising, this is a must read.

Subterranean Online should be considered one of the classiest genre magazines in the business. They consistently publish fascinating fiction, from SF to Fantasy to Horror…to the indescribable. Read it with joy.