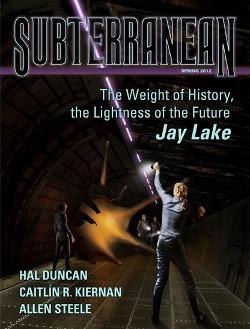 “The Weight of History, the Lightness of the Future” by Jay Lake
“Sic Him, Hellhound! Kill! Kill!” by Hal Duncan
“Random Thoughts before a Fatal Crash” by Caitlín R. Kiernan
“HERE and THERE” by Neal Barrett, Jr.
“A Holy War, A Lucifer Jones Story” by Mike Resnick
“Angel of Europa” by Allen Steele

It’s a wide range of settings on the Spring Subterranean Online, with locations ranging from Earth to the farthest planets, to Heaven itself.

“The Weight of History, the Lightness of the Future” by Jay Lake, is set a thousand years after “The Mistake,” an alien attack on all the human worlds that set them back to a preindustrial age.  Humans are just now reestablishing contact amongst themselves with the help of their sentient ships.  Cannon is one of the remaining humans who dates from before the Mistake, and is exploring at the limits of human space to find clues to the identity of the aliens.  The story deals with some excellent concepts and manages to solve the mystery with a solution that isn’t quite what you expect.  Any story that nods toward Cordwainer Smith gets a few extra points in my book.

“Sic Him, Hellhound! Kill! Kill!” is a different take on werewolves, which are more like shapeshifters and not doomed to change only on the full moon.  The narrator is a werewolf, going with his boy to catch a vampire (called a “tick” and fundamentally different than regular vampires).  Hal Duncan‘s story turns into a showdown that is pretty standard, but I loved the conception and the execution.

Caitlin R. Kernan‘s “Random Thoughts before a Fatal Crash” is truth in advertising:  it’s about the life of a poet/filmmaker living in Paris, using comments and notes to flesh him out.  The narrator is a fan of the occult and alternates that with having indiscriminate sex with men and women.  The story holds interest because of the writing, but it’s hard to see where everything fits together.

I have always looked forward to reading Neal Barrett, Jr.‘s stories ever since I discovered his underrated classic “A Day at the Fair” many years ago.  “HERE and THERE” is a slight work with three vignettes about the afterlife.  There’s one about a way to contact the dead, another about how those in the afterlife try to while away the time, and a third about a girl’s day out in heaven.  The writing is good and the individual elements amusing, but the story really doesn’t go anywhere nor does it make any overarching point.

Mike Resnick continues his always amusing Lucifer Jones series with “A Holy War, A Lucifer Jones Story.”  In this case, our antihero Lucifer washes up on a south sea island, where he is immediately declared a god by the natives.  This is especially pleasing to Jones, since so many of them are half-naked women.  And, as a god, he gets to be consort to Tondelayo, the most beautiful of them all.  But Jones is not the only god in the area, and things get very complicated.  The story, like all in this series, is fun to read, but goes on a bit long, especially since the twist in the end is not hard to figure out early on.

“Angel of Europa” is a hard science mystery story about an expedition to Jupiter’s moons.  Otto Danzig is awakened because he is the ship’s arbiter, and his job is to settle disputes among the crew.  This is a big one: two men have died in an airlock accident and many think their pilot, Evangeline Chatelain, may have killed them deliberately.  Danzig has to get to the root of the matter, and try to be impartial as he becomes more and more attracted to Evangeline. Allen Steele makes this a first-class mystery, less of a whodunit than a question as to whether there was a crime or not.

I enjoyed all of the stories in this issue; they are eminently readable and also have some very vivid characters.  I am continued to be impressed by the quality in the stories in Subterranean.