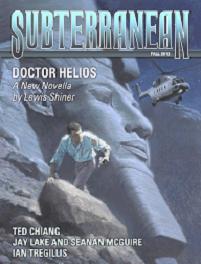 “Doctor Helios” by Lewis Shiner
“The Truth of Fact, the Truth of Feeling” by Ted Chiang
“Hook Agonistes” by Jay Lake and Seanan McGuire
“What Doctor Ivanovich Saw” by Ian Tregillis

Subterranean has put out another superior issue. Somehow this e-zine presents classy and exciting fiction almost every time they publish.

This cornucopia starts with a new story by Lewis Shiner. “Doctor Helios” is a cold war spy novella that begins in Egypt in the year of 1963. John York, a spy from the CIA is sent to Cairo. He, of course, gets involved with beautiful women, car chases, guns and super-villains. It’s written in a very Ian Fleming style and the setting is vividly brought to life. We smell Cairo and feel the heat in the desert. However, as the plot continues, the politics get muddy and York’s wonton sexual liaisons become a heavy load of responsibility. It is an exquisitely done post-cold war deconstruction of the super-spy/super-villain story. Wonderfully written, but in no way is it a piece of fantastic fiction.

The next offering is SF, pure quill SF as Gardner Dozois calls it, and excellently done. In “The Truth of Fact, the Truth of Feeling” Ted Chiang maintains his past high standards. This is a confessional by a reporter, in the near future, who is writing an article on a new software coming out called “Remem.” In this future the world has lifelogs that record our individual lives from just after birth to death. Unfortunately, that is so much information that finding anything specific takes too long to make it worthwhile. Remem is supposed to make sorting of all those memories quick and easy. The reporter decides to test Remem on himself by looking over his relationship with his daughter.

At the same time a second strand is intertwined with the first strand and is about a tribe of people in 1941 facing a major technology change of their own. Westerners are introducing the concept of writing.

In the contrast of two overpowering technological changes, Chiang examines questions as varied as: What is memory? What is the difference between truth and facts? Are foggy memories a blessing or curse? What will happen to a community with such a breakthrough?

“The Truth of Fact, the Truth of Feeling” is a stimulating walk through these discussions, wrapped up in a surprisingly moving picture of a man and his daughter. This one is not to be missed.

“Hook Agonistes” by Jay Lake and Seanan McGuire hits all my SF sweet spots. It’s a masterful far future story set on an alien spacecraft with a few humans from a destroyed earth kept alive as a janitorial crew. This scenario is complicated by the fact that a mysterious robot/AI named Jas is the de facto leader of those humans still alive. The trip has lasted hundreds of years and Jas has tried to keep the memory of Earth alive for its descendants. We learn right from the beginning that time on board is reckoned as 300 A.L. which stands for After Lowryland . There are quotes from Mr. Lowry sprinkled throughout the text that illuminate what is taking place and how these people came to be on the ship.

This is a clever and emotionally fulfilling novella as we come to know Jas and the problems he encounters. Also, it is delightfully written, revealing just enough with each section to help us put together what is happening without giving too much of the mystery away.

“What Doctor Ivanovitch Saw” by Ian Tregillis pales a bit in comparison to these others, but is a solidly done recounting of an alternate universe where America did not enter World War II and the Nazis were defeated by the Russians. Doctor Ivanovitch is a scientist trying to discover how the Nazi’s were able to create people with Superpowers during the war. The Russians are in a race to determine this secret weapon before the Japanese discover it. It’s well written but a bit flat and unsurprising.

Read this issue of Subterranean and you will encounter some of the best SF work written this year.