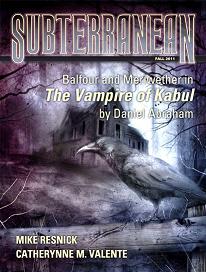 Subterranean Online‘s fall issue specializes in longer fiction, something you rarely see in an online magazine.  And they make the most of it, with some excellent fiction all around.

“White Lines on a Green Field” is the story of Bunny, and their miraculous small town high school football team, lead by Coyote, a swaggering, magical boy who can do everything and has all the girls and boys in the school in his thrall.  I don’t usually like Coyote stories, but this grabbed my interest from the beginning and held it the entire time, as Catherynnne Valente introduces fantastic and memorable characters and events one by one.  It was easy to get caught up in the excitement she generates and makes you want to know what the payoff is.  The ending is a good one, too.

Mike Resnick has written in an African setting many times, but rarely better than in “SHAKA II.”  It’s based upon the history of the Zulu tribe in South Africa, where their king Shaka turned them from a small tribe on a tiny area into one of the largest empires on the continent.  His version is about Robert ole Buthelezi, who becomes the second Shaka, and whose vision for conquest is far more expansive than anyone can dream about.  Told by his brother and confidante John, the story of his rise to power is fascinating.  Robert — taking the name of Tchaka — is a fascinating monster:  ruthless, smart, cold, cruel, ambitious, and amoral beyond belief.  He should be a thoroughly unpleasant character, but Resnick makes him absolutely fascinating.  I was originally a bit disappointed in the ending, but the more I thought about it, the more I realized it was far more complex and subtle then at first glance, and works superbly. By all rights, this should be a leading contender for Best Novella when awards time comes along.

“Antiquities and Tangibles” by Mike Pratt is a “mysterious shop” story, a subgenre I tend to like. Martin Grinde runs the shop, filled with strange and magical items.  Eunice Stuart shows up, looking for something intangible:  happiness.  Grinde tries to help her with it, but, of course, there are problems.  It’s a very good story, though a bit too long for the concept; it should have wound up a bit sooner.

The final story in the issue is “Balfour and Meriwether in The Vampire of Kabul,” a clever adventure set in the 1880s and the time of the Great Game between England and Russia.  Balfour and Meriweather are two supernatural adventurers, reminiscent of Holmes and Watson, though far more evenly matched.  They are quickly put into a situation where they must  join forces with their mortal enemy, Maria Feodorovna, the czarina of Russia.  The Czar and Queen Victoria are taken over by a malign creature from the hills of Afghanistan, and it’s up to the three to call a truce and defeat the supernatural enemy.  Daniel Abraham‘s story is a lesson in how to create memorable characters in a minimum of words, and the adventure grabs you and carries you to the end.  One more great read.

As you can tell, I was strongly impressed by this issue.  It was SF and fantasy at its best; anyone who loves great storytelling should click on the link and prepare to spend the time being entertained and moved.