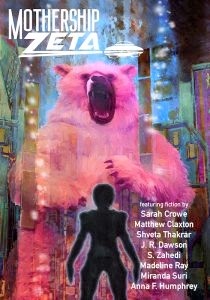 “The Remora” by Matthew Claxton
“The Mango Tree” by Shveta Thakrar
“The Legendary Legend of the Darkly’s Slayer” by J. R. Dawson
“Fairies and Tails” by S. Zahedi
“Montreal 2014” by Madeline Ray
“Over and Over Until the End” by Miranda Suri
“Aeternum” by Anna F. Humphrey

It feels surreal to write a first review of the (hopefully not) last issue of a magazine. In Issue 6 Mothership Zeta takes a temporary timeout rather than cutting writer pay, and in the words of famous morning showhosts Rhett and Link: “Let’s talk about that.”

Escape Artists, Inc. has long made their name through audio fiction subsidized by donors, and as readers may know, Mothership Zeta was their experiment in paid print subscription. Whether because in today’s internetainment market audio fiction is an easier sell for a distracted and busy user-base, or because Mothership Zeta simply didn’t have the name recognition of its freebie big brothers, the publication was forced to announce they would be going on hiatus after this January issue, though they hope to be back as soon as finances permit.

Their first story, “Thursday in the Ice Fortress of Zelatharia the Terrible” by Sarah Crowe captures a long office day in a supervillain’s hideout with an innovative clock-based paragraph format: a time-stamp marks the beginning of every few sentences. There’s a lot of fun commentary and snark, but not a lot of character development for the henchman protagonist, with a random twist ending that lacked build-up or drive. A fun read that won’t change your life. I liked it.

The next story, “The Remora,” by Matthew Claxton, jumps in right away with a “grabby” sentence, starting with the words “the fuzzy pink robot bear lunged.” This reviewer will read anything that begins with fuzzy pink robot bears, but the scenes that followed seemed convoluted and confusing at times. Sometimes the character’s reactions to situations seemed unrealistic or odd: why is the MC “giggling” about hallucinations she clearly doesn’t want, and are we really to believe that in a world of insane body modifications she’s never considered getting the laser-elbows her friends have? Come on, don’t lie, Matt, we’ve all considered those.

Nevertheless, what begins with a “kid-friendly bank mascot” battle becomes a brilliant exploration of Claxton’s “remoras”: couch-potatoes who hack the video feeds of folks with exciting jobs in search of a borrowed adrenaline rush. A metaphor for today’s inane, incessant, and mind-numbingly frustrating Tumblristas, Twitter Tweeps, and Youtube Asses if ever one existed; I could insert a rant about achievers vs. commentators here, or you could just read Claxton’s story. In the end, “The Remora” leaves the reader wanting more depth both from the theme and from the main character herself, but it wins mad props for a solid marine biology reference in the title and basic come-uppance.

Next, Mothership Zeta offers us “The Mango Tree” by Shveta Thakrar. Thakrar immediately impresses with a gift for elegant description—writers, take note—that evokes four senses right off the bat in the first three paragraphs. Dang, girl. I’m here feeling like I’ve dunked my face in a bucket of squishy mangoes and I am all about these mangoes.

Plot-wise, there’s not much innovation: even with the unique Indian-American perspective, we’re already familiar with the “old grandmother is right about magical beings and silly skeptic young person learns a lesson.” Sometimes the author over-writes, with unnecessary metaphors about cool pools and tongues and stomachs in harmony at unusual points of the story, so things don’t move very fast, and the protagonist’s magical ability to heal witches seems to come out of left field over by the moon somewhere. Thakrar’s strengths lay in her gentle style and smooth, lyrical, flow: she places us solidly in the protagonist’s culture with details about religion, food, health, and socioeconomic groups all without ever pausing for chunky exposition. The story’s simple, vivid, and sweet. Incidentally, like a good mango.

On the other end of the trope and tone spectrum, J. R. Dawson‘s “The Legendary Legend of the Darkly’s Slayer” promises good things right from the title. Good things like a stereotypically perfect Chosen One, thatched roofs created only “so nefarious people can set them on fire,” and references to Hans Christian Anderson stories about orphans who die in the cold. The story actually stars Annie, an ugly, impoverished, and utterly unimportant sidekick for a fantasy Chosen One. Annie’s got it rough. She’s friendzoned by the Chosen One, vomited on by the Chosen One, covered in muck in a very George Lucas-esque “Swamp of Shadows” as the Chosen One finds himself (think Luke on Dagobah)…and all the while she’s got to make sure he doesn’t kill himself “by choking on some fish bone or tripping over some crossbow.”

In the spirit of surprises, I’d hoped Dawson would make the Chosen One’s character sympathetic, instead of pointing the old literary dunce cap at him. There’s nothing worse than predictability when you’re taking down archetypes, and Dawson sets up the high-falutin’ Chosen One as such a clear foil to common-sense Annie that the ending seems obvious about halfway through. I shouldn’t have worried: Dawson knows what she’s doing.

This could have been just another humorous story in the spirit of those supervillain meme lists on Reddit. There would have been nothing wrong with that, but through Annie’s eyes, Dawson’s tender yet sharp analysis of her broken characters elevates the ending into something more, something about Fate, the little things in life, the foolishness of ambition, and the capital letters we use to make ourselves feel special. Even Guard Number Eight becomes a fully-fleshed, living and breathing character, and in a simple, common sense way, this story, like Annie, achieves without showing off. Because the most important things, and the most important people, aren’t Important with a capital I.

Next, despite the clever pun in the title, S. Zahedi‘s “Fairies and Tails” isn’t particularly funny. It begins with a depressed, nameless mouse describing his dreams and true love, but because of the tonal dissonance between the title and the first sentence it took a while to realize the story’s non-humorous intent. The story then ends abruptly right after a nondescript conversation with some dream woman before the mouse can go on any adventures. Without the fast characterization or the succinct plot that usually characterizes flash fiction, the reader’s left wondering if the editor accidentally left off most of the story. There’s no error in Zahedi’s syntax or style, and she’s a Sufi poet, so perhaps there’s something I don’t “get.” Maybe it’s not you—maybe it’s me.

Any story that starts off bashing New York has my vote, and that’s Madeline Ray‘s “Montreal 2014.” (Don’t get mad at me, NY, I’m kidding.) The idea of a lonely Sphinx hanging out in Montreal with a clever literary enthusiast makes interesting reading, but the execution is sullied by a self-congratulatory tone and odd heavy-handed commentary on random unrelated topics. At one point, the author feels compelled to force a brief but ultimately going-nowhere conversation about gods and evolution. Rather than adding anything new or insightful to what she makes very black and white, Ray avoids several intriguing avenues of thought made available by the mechanism of the speculative fiction genre in a Western mythology setting (eg, the ancient Greeks and Egyptians believed in forms of evolution—what about that?).

The rest of the Sphinx’s conversations seem similarly masturbatory: they’re brief pauses on important topics that never take on any depth, despite the Sphinx’s constant spoken reminder to us that these are interesting conversations. So much potential went ignored. With the Sphinx eating humans all the time, what about musings on the ethical considerations of killing sentient things? On personhood, on humans killing animals, or humans choosing which people should die (convicted criminals vs. fetuses vs. enemy armies, etc.)? To what extent is human filiality logical, or moral, and what steps should the human main character take to protect human life from the Sphinx, if any? Whose lives matter? In a story that’s entirely made up of conversations, the conversations need to attain depth; these characters completely lack authentic curiosity.

It is pretty funny when they talk about the clitoris, though.

Another funny read: Miranda Suri‘s “Over and Over Until the End.” Both your SF brain and your fantasy heart can rejoice: it’s about a (pseudo-)genie on a spaceship! The captain of the ship realizes this genie might be the last hope for the last of humanity, but unfortunately the person who owns the right to make the genie’s wish wants all of humanity to die. It’s a great set-up, and Suri drops memories and hints about the protagonist’s past lives without clogging the story. Her expert plot twists hold up without seeming zany, and if space doesn’t get your nerdy blood pumping, dinosaurs and time travel will.

Alas, Suri’s story ends abruptly without the protagonist actually making any plot decisions of his own. While the plot does close out the themes addressed at the beginning, the final product feels like the first chapter of a novel, not like a short story that stands on its own. Also, male writers have often been accused (rightfully so) of obsessing over body parts when writing female characters (“I looked down at my breasts…my breasts bounced as I walked down the stairs”) and Suri’s definitely guilty of doing the same with a male. All in all, however, “Over and Over Until the End” is an enjoyable, fast read showcasing wild writerly chops.

Finally, we close the zine’s fiction selections with Anna F. Humphrey‘s “Aeternum.” I liked watching Elsa “Let it Snow” as much as the next girl, so a lady scientist exploring living ice people hit a soft spot right away. There’s even singing involved. It’s a complete, elegantly-written flash fiction where the protagonist must choose between her world and a new one, but there’s something a little eerie about her choice that I’m not sure Humphrey intended. Readers will have to decide for themselves if they like the ice people or not.

So those are the stories Mothership Zeta chose for their last e-zine leading up to their hiatus. For a final issue, it’s a good mix of different science fiction and fantasy, all with a generally lighthearted tone and interesting ideas. They briefly describe their plans to investigate Indiegogo, Patreon, or other crowdfunding initiatives, so they seem to be open to suggestions from science fiction aficionados if any members of the community would like to offer ways to support the publication. In the meantime, hopefully the community can continue to find works by some of these writers in other places.

Jen Finelli is a world-traveling scifi author who’s ridden a motorcycle in a monsoon, escaped being locked in a German nunnery, discovered murals and poetry in underground urban caves, explored jungles and coral deserts, and hung out with everyone from dead people and prostitutes to secret political influencers and Senators. You can find links to some of her publications on byjenfinelli.com, her upcoming film at mysweetaffair.com, and her comics-character-who-kills-his-author at http://becominghero.ninja. Follow her adventures @petr3pan on Twitter!